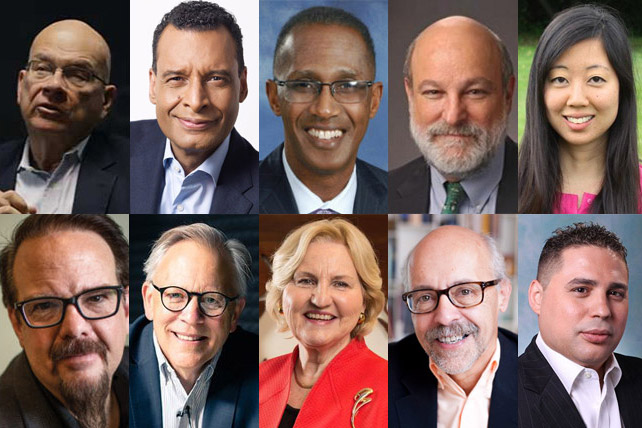 About 50 prominent evangelicals are attending an invitation-only gathering this week at Wheaton College to discuss the future of evangelicalism—more specifically, the condition of the movement and the divide that resulted from the election of President Donald Trump.

Bock, who also helped to organize the event, said evangelicals need to return their focus to the term’s true definition: a person who believes in the authority of the Bible, salvation through Jesus’ work on the cross, personal conversion and the need for evangelism.

Bernard, a black pastor of the 40,000-member Christian Cultural Center in Brooklyn, said he fears that white evangelical supporters of Trump have put the reputation of American Christianity in danger. “They continue to squander their moral authority in an attempt to sanitize the president,” said Bernard, who resigned from an advisory group of evangelicals last year after Trump blamed “both sides” for deadly violence in Charlottesville after a white supremacist march.

He believes many white evangelicals have been too focused on what they view as issues of sin and personal morality, such as abortion and same-sex marriage, without looking at issues that most concern black evangelicals, such as economic inequality and police shootings, telling the Washington Post, “the bill has now come due.”

Keller, founding pastor of Redeemer Presbyterian Church in New York told the Post, “We need to be wiser and better in the way we do ministry. Faith and God and sin and grace and idolatry are about fundamental human reality, and everything else is a way of dealing with those issues. It is a complete terrible reversal when [people believe] religion is about politics when it’s the other way around.”

Keller, who said many at the meeting had concerns about the loss of religious freedom under Barack Obama, now feel under attack from those on the right if they support open immigration.

Exit polls show 80 percent of evangelicals voted for Trump. Birdsall told the Post that given such strong support, a case could be made that the greatest barrier to the gospel is evangelicals’ embrace of “Trumpism” as an ideology.

Birdsall told the Christian Post they are “not involved in discussions yet” suggesting those who have supported Trump have sullied their evangelical credentials.

“I have been in touch with two of their offices with a desire to engage in a meaningful conversation,” CP quotes Birdsall saying. “I don’t think they are globally perceived as evangelical thought leaders by virtue of what they have written or by virtue of the values that are reflected in their public statements.”

“Any definition of ‘thought leaders’ and any definition of evangelicalism that excludes the Billy Graham Evangelistic Association and Franklin Graham is a pale imitation—anemic and incomplete,” says Land.

Organizers say the meetings are not political, but Yang told the Washington Post she expects discussion around hot button political topics including the #MeToo movement about sexual assault and harassment, the white supremacy march in Charlottesville, and Trump’s refugee and immigration policy changes.