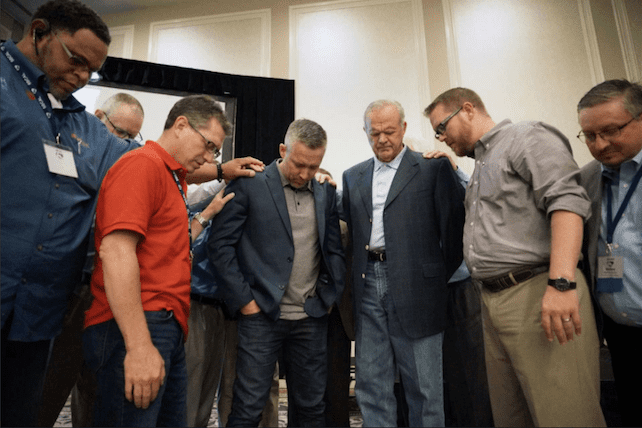 J. D. Greear, the newly elected president of the Southern Baptist Convention, told NPR’s Morning Edition that the SBC needs “to decouple the identity of the church from particular political platforms over which there can be disagreement.”  He did not specify what those issues were.

In an interview that focused entirely on politics, NPR’s Rachel Martin asked Greear about the controversy surrounding Vice President Mike Pence addressing the SBC gathering, Attorney General Jeff Sessions using the Bible to support enforcing immigration laws, the definition of an evangelical and the #metoo movement.

Regarding the Pence speech, Greear said evangelicals have taken the gospel and encumbered it with too much specificity on political positions where there is room for disagreement. Using the story of Jesus selecting his 12 disciples, Greear said Jesus chose Simon the Zealot and Matthew the Tax Collector to follow him, two people who were “on opposite sides of the most pressing political issue of the day– the attitude toward Rome” suggesting Jesus chose followers from diverse political backgrounds.

Greer said the Pence speech sent “terribly mixed signals” about the SBC being aligned with the Republican party while admitting Republicans have championed certain positions that evangelicals have favored. He also expressed concern over the tone and message from President Donald Trump on issues such as race, immigration and his treatment of women.

On immigration Greear said the Bible teaches submission to authority but then entered the political debate saying, “we recognize to separate families in the name of immigration policy seems too harsh a punishment for the crime,” adding “I am very grateful to see things happening that are going the other way on that.”

Asked by Martin his thoughts on some evangelicals shedding the term over political disputes Greear said “We don’t need to cast off the label to pick a new one…we need a change of heart, a change values.”

As for the #Metoo movement, Greear said there sometimes has been a “hesitancy to listen to the victim when we should have listened to the victim.”

While politics was the focus of the NPR interview, it was not one of the priorities identified in a news conference that Greear gave following his election at this month’s SBC annual meeting in Dallas.

He told reporters he had six priorities in the coming year; the Gospel message, diversity in leadership, a focus on evangelism, church planting, mobilization of college students, and engagement, specifically in the areas of cooperative giving and missions.

“For as long as there has been a convention you’ve had things that threatened to challenge that unity of the Gospel. [I’m] just wanting to see the Gospel be what we unify around and not be divided on secondary and tertiary issues.”

At the news conference, Greear was asked what he could do to help women feel more comfortable in the church, especially those who have been victims of abuse.

“We have to be very clear that some things are not only immoral, they’re also illegal,” he stressed. “And because they are illegal and we, as Southern Baptists who believe in the Bible, believe God gave government authority for our protection … that means we have to be safe places for women to report abuse, and be immediate in reporting things to the proper authorities.”