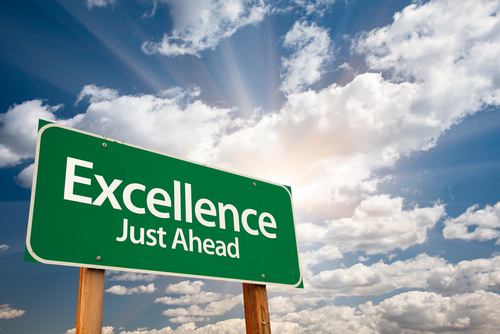 “Good enough” is not good enough—at least, not when you’re opening your church’s doors to the unchurched.

All too often, churches are mired in mediocrity. Their facilities sorely need a new coat of paint, the piano is woefully out of tune, the sound system is tinny, and the lighting is poor. And the truth is that Christians usually don’t mind very much because—well, we’re family.

But just like you clean your house when you invite company over, churches need to put a new emphasis on excellence when welcoming seekers from the community.

As we pursue excellence in our churches, we honor God, and we connect with nonbelievers. When I was an atheistic journalist and my wife brought me to church, I saw a place where people were intent on creating a well-planned, well-produced outreach service. They obviously cared about the quality of their service as much as I cared about the articles I wrote for the newspaper. Excellence spoke my language and created common ground.

The pursuit of excellence requires us as leaders to plan each aspect of an outreach service or event with clear goals in mind, paying attention to details and anticipating the reaction of the unchurched attendees.

Some congregants may balk at this, saying that what was done in the past for church folks ought to be good enough for unchurched folks. But as author Franky Schaeffer says: “The idea that ‘the Spirit can work somehow,’ that God can bring something out of it if we just sort of throw it out there, is unjustifiable from those who aim to know the living God and can see His integrity and dedication to quality in His Word and the world around us.”

Pursuing excellence may mean doing only two songs well instead of adding two more marginal tunes. It may mean substituting a video for a drama that just didn’t come together as you had hoped. It means seeing everything through the eyes of seekers as you prepare for a service.

While it’s important to know what excellence is, it’s equally crucial to understand what it isn’t.

• First, excellence doesn’t mean neurotic perfectionism. This corrosive attitude can crush the spirit of the people involved. Instead, excellence simply means doing the best we can with what we’ve got.

• Excellence isn’t a value that can be imposed from the top; it must be modeled from the top. When you, as a key leader of an outreach team, are personally committed to making your contribution with excellence, others are more likely to follow your cue.

• Excellence doesn’t mean being slick. A seamless, technically superb event that lacks heart, authenticity and passion will surely be a turn-off to discerning visitors.

Excellence is our effort to do everything heartily as unto the Lord, just as Col. 3:23 tells us. And when we do that, amazing things happen. Not only do seekers take our church more seriously, talented new volunteers often step forward to help. That’s because, as my friend and Willow Creek Community Church Pastor Bill Hybels likes to say, excellence attracts excellence.

Nancy Beach, head of programming at Willow Creek, once told me how a young couple in the church—both extremely gifted as musicians—stepped forward to offer assistance after seeing the level of quality at Willow’s outreach-oriented weekend services. Today, they’re both key contributors to the church’s programs.

Conversely, a sloppy and uninspired service can deter talented people from volunteering to help. Why? Because people who take their skills seriously often hesitate to get involved in a production that might embarrass themselves and their audience. When they see a church that’s honestly trying to reach seekers with excellence, they’re much more apt to participate.

More than 20 years ago, co-authors Tom Peters and Robert Waterman Jr. analyzed the best-run corporations in the country and distilled the lessons they learned into the classic book In Search of Excellence. They emphasized the need to respect the dignity of people, the necessity of maintaining simplicity and the important role of constantly monitoring the level of quality to guard against erosion.

Today in the 21st century, that’s not bad advice—even for churches planning their services with the goal of bringing the Gospel to spiritual seekers.

Copyright © by Outreach magazine.  All rights reserved. Used by permission.