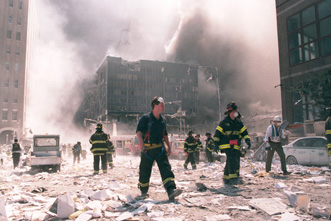 On 11 September 2001, the world stood in shock as 3,042 lives were lost. With indescribable sadness, the world gathered in prayer. Today we continue to pray for God’s peace on all the families and friends who are still affected.

The world will not forget the clouds of dust and ash billowing out from the Twin Towers. The fog was symbolic of the days that followed 9/11, as much was said and written that obscured the truth. Now, a decade later, perhaps the dust has settled enough for us to see more clearly the significance of what happened. Here are some observations:

1) The strength and complexity of evil

Few dispute that these were evil acts. However, much more can and should be said about evil itself. Explaining evil is complex; its far-reaching tentacles breed and spread like a web. Sadly, reactions to evil often encourage new forms of evil and 9/11 is a case in point. One product of 9/11 was the ‘war on terror’, which, whatever its initial justification, resulted in America, initially acknowledged as victim, becoming widely perceived as villain. Our ‘surveillance society’, gripped by fear, generated a climate in which any authoritarian action – arresting photographers or deporting undesirables – can be justified with the words ‘in the interests of national security’.

Another unexpected result, at least in the UK, was a deliberate attempt by the political powers to reshape the cultural landscape. Faced with questions about Islam, we were told that there was ‘authentic, moderate Islam’, based around mosques and imams sympathetic to the Western system and its heretical counterpart, ‘radical Islam’, influenced by Al Qaeda. Muslims of the first type were approved by the state; those of the second, condemned and persecuted. This is problematic. First, it is extraordinarily simplistic. Second, it represents an unwise intervention by a modern secular state into theological issues. The result has been that the so-called authentic Islam has acquired almost ‘favoured religion’ status, which has troubled other faith groups, who feel marginalised when not granted an equivalent position in the socio-political discourse.

2) The weakness of Western secular culture

The events of 9/11 brutally reminded those who considered themselves responsible for world affairs that their mastery of events was shallow. Yet the damage went even deeper. Before 9/11, politicians and philosophers were considering whether we faced ‘the end of history’ and were discussing whether Western liberal democracy was the ‘final form of human government’. Prior to 9/11, business leaders highlighted globalisation and the opening up of the entire world for capitalism, business and profit. Intellectuals and investors alike crafted a global script for the new millennium. Unfortunately, Al Qaeda disagreed and demonstrated that they held a radically different vision of the future. The fact that the most iconic event of 9/11 was the toppling of the World Trade Centre was a stark reminder that, for Al Qaeda, consumerism and trade are not the ultimate goals.

It is increasingly evident that secular culture lacks adequate depth and strength to counter a radical, aggressive Islam. The atheistic and agnostic worldviews prevalent in the West lack the moral authority of religion. The popularity of secular culture stems from the apparent freedom it offers. However, the weakness of this argument was revealed in a London advertising campaign, when the best slogan they could develop was ‘There’s probably no God… now stop worrying and enjoy your life.’

The reality is that secular humanism finds itself with no mechanism to confront a faith that believes in something or someone beyond the here and now. Faced with fervent belief systems, secularism struggles for words. Preoccupied with selfish gain and living for the present, secular humanism is utterly submerged by people whose beliefs allow them to choose death.

In the presence of evil it would be comforting to end with an upbeat assessment, yet I do not find that this is possible. What I can say is that in the last ten years challenges have been revealed that demand a response:

There has always been a temptation for people to shun serious issues and preoccupy themselves with personal fulfilment. In 9/11 we can see a reminder that the world is not a tranquil place of joy, but a troubled scene in which a bitter struggle rages. Our world is a battleground and people need to accept this. Some people have seen 9/11 as a declaration of war between cultures. However, we should see it as something else: a reminder of the reality that we are all engaged in a constant and painful battle between good and evil. As St Paul said, ‘For our struggle is not against flesh and blood, but against the rulers, against the authorities, against the powers of this dark world and against the spiritual forces of evil in the heavenly realms’ (Ephesians 6:12).

We must recognise that the West played a part in sowing the seed of the tragic events of 9/11. We found it too convenient to turn a blind eye to the injustices present in the Middle East and to the unholy alliances that our governments made for the sake of national prosperity. We need to turn again to the Middle East and the complex issues of international dialogue and engagement. Some find the implications of 9/11 terrifying – a sign of a world out of control. Such fear is unpleasant at best and potentially dangerous. Fear makes it impossible to love and to hope.

However, the Bible affirms that Christ’s perfect love banishes fear. As followers of Jesus Christ, the perfect embodiment of love, we have the opportunity to reach out to our fellows – Muslims, secularists, atheists, agnostics – encouraging the respect, dignity and care of all human beings. We can come in the spirit of Jesus Christ and seek peace in the world, working to cast out all fear as we ‘love our neighbours as ourselves’.