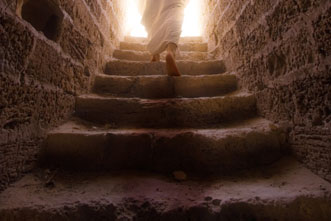 Do you, like me, have family members who do not believe in Jesus? If so, we are in good company. So did Jesus. And I think this is meant to give us hope.

According to the Apostle John, “not even his brothers believed in him.” (John 7:5).

Why didn’t they believe? And what made them change?

The Bible doesn’t answer the first question. But I’ll bet it was difficult to have Jesus for a brother.

First, Jesus would have been without peer in intellect and wisdom. He was astounding temple rabbis by age 12 (Luke 2:42, Luke 2.47″>47). A sinful, fallen, gifted sibling can be a hard act to follow. Imagine a perfect, gifted sibling.

Second, Jesus’ consistent and extraordinary moral character must have made him odd and unnerving to be around. His siblings would have grown increasingly self-conscious around him, aware of their own sinful, self-obsessed motives and behavior, while noting that Jesus didn’t seem to exhibit any himself. For sinners, that could be hard to live with.

Third, Jesus was deeply and uniquely loved by Mary and Joseph. How could they not have treated him differently? They knew he was the Lord. Imagine their extraordinary trust in and deference to Jesus as he grew older. No doubt, the siblings would have perceived a dimension to the relationship between the oldest child and their parents that was different from what they experienced.

And when swapping family stories, it would have been hard to match a star appearing at your brother’s birth.

Jesus out-classed his siblings in every category. How could anyone with an active sin nature not resent being eclipsed by such a phenom-brother? Familiarity breeds contempt when pride rules the heart.

More pain than we know must have been behind Jesus’ words, “a prophet is not without honor except in his hometown and in his own household.” (Matthew 13:57)

So as we assess the role our weak, stumbling witness plays in our family members’ unbelief, let’s remember Jesus — not even a perfect witness guarantees that loved ones will see and embrace the gospel. We must humble ourselves and repent when we sin. But let’s remember that the god of this world and indwelling sin is what blinds the minds of unbelievers (2 Corinthians 4:4).

The story of Jesus’ brothers can actually give us hope for our loved ones. At the time his brothers claimed that Jesus was “out of his mind” (Mark 3:21), it must have appeared very unlikely that they would ever become his disciples. But eventually they did! And not only followers, but also leaders and martyrs in the early church.

The God who said, “Let light shine out of darkness,” shone in their hearts to give the light of the knowledge of the glory of God in the face of their brother, Jesus (2 Corinthians 4:6).

So take heart! Don’t give up praying for unbelieving family members. Don’t take their resistance as the final word. They may yet believe and be used significantly in the kingdom!

And while they resist, or if they have died apparently unbelieving, we can trust them to the Judge of all the Earth who will be perfectly just (Genesis 18:25). We can trust him when it happens.

It is moving to hear James refer to his brother as “our Lord Jesus Christ, the Lord of glory.” (James 2:1) Can you imagine what this phrase meant for James? The Lord of glory had once slept beside him, ate at his dinner table, played with his friends, spoke to him like a brother, endured his unbelief, paid the debt of his sin, and then brought him to faith.

It may have taken 20-30 years of faithful, prayerful witness by the Son of God, but the miracle occurred: his brothers believed. May the Lord of glory grant the same grace to our beloved unbelievers.