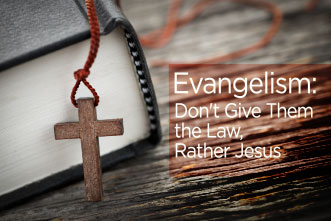 I became a Christian at the age of 20. I had grown up around Christianity and went to church with my parents (who did the best that they could), but I’m not sure I ever understood it. I knew cognitively that Jesus died on the cross for our sins and rose again, but somehow I understood that to mean “be good.” The problem was my heart—it had no interest in “being good.”

So I lived in sin and rejected “being good.” In my teens, the only Christians I was around called me to live a moral life but never really talked about Jesus. No thanks, sin is fun, I thought, and I went about my business.

Then I wound up in jail … again. My life of sin was fun—but jail was not. So I decided to see what was in the Bible that my parents gave me. That’s when I met Him—Jesus Christ. This guy is incredible. I had to know more. Although I found that he forcefully confronted my sin and idolatry, I couldn’t help believe that He was the reason I was on earth.

In jail, I was held captive by the city of Reno, but it was there that I was captivated by Christ.

Somewhere over the course of a month or so, I became a Christian because I was exposed to the gospel of Jesus, and it wasn’t long before I began to wonder why nobody ever told me about Him and what He did for sinners. I remembered plenty of conversations about morals and how bad I was and what I “should” do, but there had been no Jesus. I was given the law without the gospel. I suppose this is what fuels my passion for evangelism. People need to meet Jesus, not be told to “be good.”

Are you a disciple of Jesus? Yes? Then you are called to evangelism. As J.I. Packer says, “Always and everywhere, the servants of Christ are under orders to evangelize.” I can’t tell you how many times I have talked to Christians (even pastors) who have told me that they don’t “feel” responsible for evangelism. Since when do your feelings trump the great commission? (Matt. 28:18-20) The call to be a disciple of Jesus is a call to evangelism.

When Jesus called Simon and Andrew to discipleship, his call was, “Follow me, and I will make you fishers of men.” (Matt. 4:19) If you are Jesus’ disciple, it seems that he wants to make you into a fisher of men. It’s pretty simple. Fishermen fish. Disciples of Jesus make disciples of Jesus.

It seems that many Christians believe that there is some secret code that you need to learn before you can evangelize. Christians also seem to think that evangelism needs to look a certain way. But don’t worry; there are as many styles of evangelism as there are Christians. But the goal is the same, and the reward is great.

As Charles Spurgeon says, “I am persuaded that no joy of growing wealthy, no joy of increasing knowledge, no joy in influence over your fellow creatures, no joy of any other sort, can ever be compared with the rapture of saving a soul from death.”

The concept of evangelism may be simple, but actually practicing it is hard, like any other type of Christian obedience. But God desires all men to be saved (1 Tim. 2:4), so the question you have to ask yourself is, “Do I?”