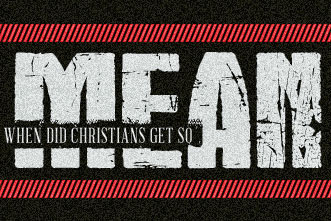 OK, this one will get me into trouble. Especially if the shoe fits. Wait for the comments on this one.

When did Christians become so mean?

Not all Christians. Most Christians I know are nice. Very nice.

But I’ve met some mean ones lately.

Now, let me be clear. I am one. A Christian, that is. (Hopefully not mean—too often.) In fact, I’ve centered my life around my faith and even am vocationally supported by Christians. (So I love you! I really do.)

But when did some of you—my brothers and sisters in Christ as we are often referred to—become so mean?

It’s mostly online. You write something they don’t agree with, and instead of a healthy disagreement, they blast you. Right there on your Facebook wall or with a hurting comment on a blog post. Where everyone can read it. In fact, some people read it even before the one who wrote the post reads it. I’ve even had guest bloggers tell me they don’t want to post anymore because of the comments.

I understand that. My blogs are reposted on different websites—with more widespread readers than I have—and I don’t read the comments much, because when I do, I’m tempted to tell them I don’t want to post there anymore. Mean people commenting—calling themselves Christians. I don’t want to play that game either. Who has time for that?

It’s not that they don’t have valid points. Many times they do, but the way they make their point doesn’t come across very Christ-like. Actually rather mean.

I get that it’s cultural now. We’ve become transparent. Honest. Blunt. But—just being honest—sometimes that comes across as mean.

I can’t imagine how those outside the faith view the way we often treat each other.

I wrote a post about Christians behaving online. It wasn’t just because I didn’t have anything else to write about. It’s because some Christians have become mean. Online. For everyone to see.

The Internet has made it so much easier—and faster—to be mean if you choose to be mean. Even anonymously if you want.

But I’ve seen it in public too.

Why, just last week, I saw a Bible study group meeting at a local coffee shop. I didn’t know any of them. I was minding my own business, but it was obvious what they were doing was discussing the Bible. They had Bibles.

Then one of them became a real jerk to the girl that messed up his order.