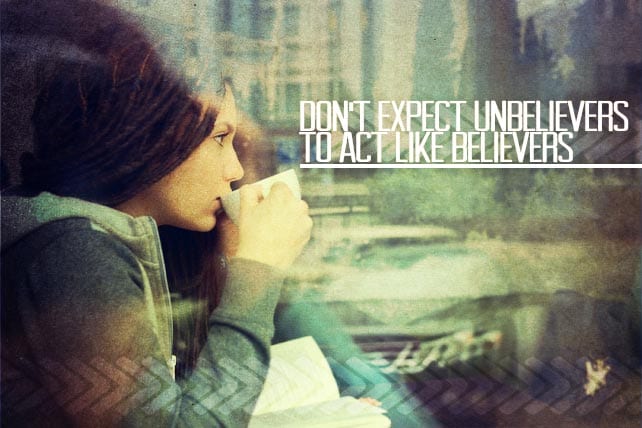 It is something I see again and again, and something that baffles me every time: People who expect unbelievers to act like believers. So often I see Christians acting surprised that their non-Christian friends or family members are acting like non-Christians. John Owen addresses this in his great work Overcoming Sin and Temptation. The book deals with the subject of mortification, of putting sin to death, and Owen dedicates one chapter to explaining why only Christians can behave like Christians.

He begins by insisting that only Christians have the ability to put sin to death. Unbelievers may suppress sin, but they cannot kill it. “Unless a man be a believer—that is, one that is truly ingrafted into Christ—he can never mortify any one sin; I do not say, unless he know himself to be so, but unless indeed he be so. … There is no death of sin without the death of Christ.”

And again, “A man may easier see without eyes, speak without a tongue, than truly mortify one sin without the Spirit.”

If it is, indeed, the case that unbelievers cannot put sin to death, then they have a higher priority: conversion. “Mortification is not the present business of unregenerate men. God calls them not to it as yet; conversion is their work—the conversion of the whole soul—not the mortification of this or that particular lust. … Let the soul be first thoroughly converted, and then, ‘looking on him whom they had pierced,’ humiliation and mortification will ensue.” There is a proper order to these things. First be saved, then put sin to death.

In reality, unbelievers who attempt to put sin to death actually go deeper into their sin. “This is the usual issue with persons attempting the mortification of sin without an interest in Christ first obtained. It deludes them, hardens them—destroys them.” And again, “To kill sin is the work of living men; where men are dead (as all unbelievers, the best of them, are dead), sin is alive, and will live.”

Owen anticipates the following objection: “Shall [unregenerate men] cease striving against sin, live dissolutely, give their lusts their swing and be as bad as the worst of men?” If unbelievers cannot put sin to death, would it be wrong of us to tell them to stop sinning or even expect them to?

He answers the objection this way: “God forbid! It is to be looked on as a great issue of wisdom, goodness and love of God, that by manifold ways and means he is pleased to restrain the sons of men from running forth into that compass of excess and riot which the depravity of their nature would carry them out unto with violence.” God dispenses his common grace to all men, and this grace keeps them from being as sinful as they otherwise would be. Sometimes God does convict unbelievers of sin and causes them to restrain that sin, yet without actually converting them.

So it becomes a matter of right priorities both for the person calling upon the unbelievers and for the unbelievers themselves: “Let men know [that putting sin to death] is their duty, but in its proper place; I take not men from mortification, but put them upon conversion. He that shall call a man from mending a hole in the wall of his house, to quench a fire that is consuming the whole building, is not his enemy! Poor soul! It is not your sore finger but your hectic fever that you are to apply yourself to the consideration of. You set yourself against a particular sin and do not consider that you are nothing but sin.” Don’t call upon unbelievers to stop sinning until you first call them to turn to Christ in repentance and faith. Even if they do not turn to Christ they may still suppress a sin, but do not make it your main purpose to convince unbelievers not to sin; instead, make it your purpose to call upon them to become Christians. And do not be surprised when, as unbelievers, they continue to behave like unbelievers.

I would like to know what you gained from this chapter. Feel free to post comments below or to write about this on your own blog (and then post a comment linking us to your thoughts). Do not feel that you need to say anything shocking or profound. Just share what stirred your heart or what gave you pause or what confused you. Let’s make sure we’re reading this book together.