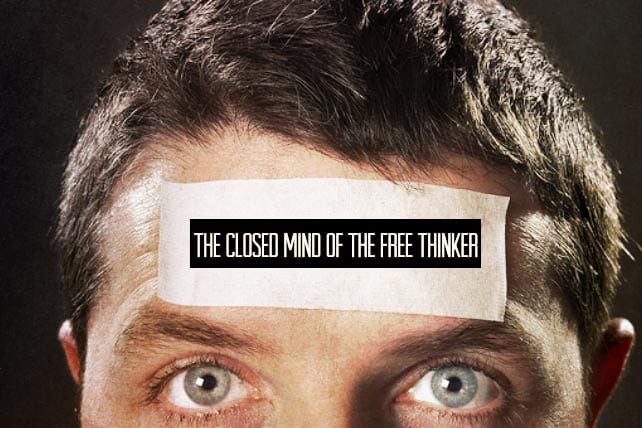 G.K. Chesterton once quipped that “freethinkers are occasionally thoughtful, though never free.” His point was that the materialistic atheist has bound the scope of his considerations to the natural world. He is free as long as he remains her prisoner. Nothing could be on the other side of the natural world, regardless of any contrary evidence that might point the other way. As long as you are comfortable in your cell, then why not declare your liberty?

Sam Harris, another atheist publishing power house, argues in his book Free Will that the notion of free will is incompatible with atheism. “A puppet is free,” Harris says, “as long as he loves his strings.” Chesterton’s colorful commentary is again insightful, “It is absurd to say that you are especially advancing freedom when you only use free thought to destroy free will. The determinists come to bind, not to loose. They call their law the “chain” of causation. It is the worst chain that ever fettered a human being.”

If the atheistic worldview really does remove one’s ability to choose, it certainly doesn’t keep Harris and Dawkins from ridiculing the believer’s choice to believe. To Harris’ point, what if they love their strings? In this video, Dawkins gives an honest response regarding an audience member’s question in which he admits that there is not a biological or evolutionary basis for free will. It is simply an illusion.

But there are other reasons beyond the philosophical puzzle of the will for questioning the appropriateness of using the term “free thinker” to define the intellectual posture of someone like Richard Dawkins.

John Gray, emeritus professor of European thought at the London School of Economics, provides a critique of Richard Dawkins in his recent article in the New Republic. He calls Dawkins a “monument to unthinking certitude” and describes his scientific approach as “that of a practitioner who does not need to bother with philosophical questions.” The article is well worth your time. Gray doesn’t deny that there are more balanced atheistic authors to consider than Dawkins, but few, if any, have a broader platform in popular culture.

Gray’s critique of Dawkins’ autobiography is bold. As Dawkins regularly berates anyone who refuses to wholesale adopt evolutionary explanations for every aspect of human behavior, what sort of crime might it be to question evolution’s leading contemporary spokesperson? Furthermore, Gray pushes back against Dawkins proximation of himself in the legacy of Charles Darwin by simply stating that Darwin was never as closed minded nor as certain.

For the sake of full disclosure, another reason I loved this article is that introduces the reader to one of my favorite apologetic arguments from Arthur Balfour, former prime minister of the United Kingdom at the beginning of the 20th century, who questioned whether our brain should be trusted to provide an accurate understanding of reality if it is indeed the result of irrational causes. If your brain is an accident then why should you trust it?

To top things off, Gray includes a line from Pascal, a philosopher I greatly appreciate, whose famous wager illustrates that betting that nature is all there is might not be well described as a prudent intellectual first move. In this way Chesterton is again helpful in contrasting the worldviews of the Christian and the atheist:

A Christian is only restricted in the same sense that an atheist is restricted. He cannot think Christianity false and continue to be a Christian; and the atheist cannot think atheism false and continue to be an atheist. But as it happens, there is a very special sense in which materialism has more restrictions than spiritualism. … The Christian is quite free to believe that there is a considerable amount of settled order and inevitable development in the universe. But the materialist is not allowed to admit into his spotless machine the slightest speck of spiritualism or miracle. … For instance, when materialism leads men to complete fatalism (as it generally does), it is quite idle to pretend that it is in any sense a liberating force.

Chesterton may have died five years before Dawkins was born, yet I think he read his mail. He anticipated his kind. And I wouldn’t be surprised if Chesteron had some indirect influence on the title of Gray’s article “The Closed Mind of Richard Dawkins: His atheism is its own kind of narrow religion.”

I must apologize that what began as a simple pointer post to draw attention to Gray’s piece in the New Republic evolved into a summation of Chesterton’s thoughts on free thinkers. I suppose it is only fitting that in honor of that jolly giant G.K.C. to end with yet one more telling excerpt from his literary corpus warning of the limitations of free thought, so called: