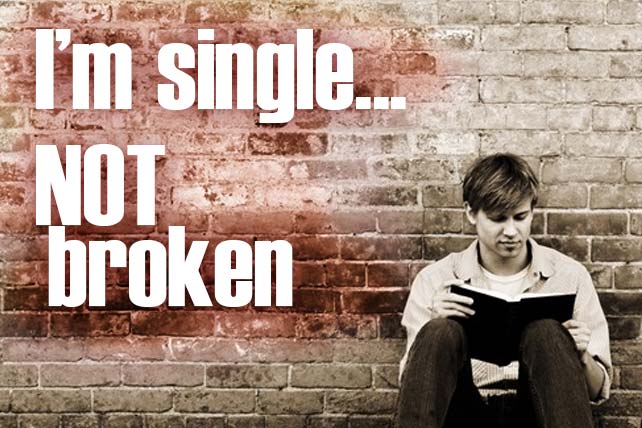 There are times when being single is really, really hard. Walking into church was definitely one of those times for me.

I hate to even admit it, because I’m a huge fan of church and have been blessed and encouraged by relationships within the body of Christ in so many ways. But if I’m honest, I’ve experienced that awkwardness of feeling alone in church more times than I wish to count.

When I was single, I remember quietly sliding into the pew all by myself. I usually chose the end seat toward the back so I could have a quick getaway if need be. Sometimes, it was easier to avoid people than to have to take the initiative to approach them. I’m an extrovert, but there’s still something really challenging about making the first move, especially when you’re alone.

Even AFTER I got married, I still experienced this struggle of flying solo more often than not. Having moved to a brand new city, and being married to a medical school student who had no choice but to work many Sundays in the month, I often had to attend church alone, many times not even knowing one other person in the whole building.

I don’t know what it is about being alone—and I fully acknowledge that my own insecurities played a role in this—but it always seemed like I was noticed more when I was alone than when I had someone by my side. It’s as though people were secretly wondering who I was, and why I was there all by myself. It’s as though something was wrong, missing or incomplete from my story—or worse yet, maybe even wrong with me. I wondered if there was something intimidating that others felt when they saw me alone, because it seemed like I was approached and greeted by FAR less people.

I’ve been married for quite sometime now, and since I’ve been traveling and speaking at many different churches about the topic of singleness and the culture of dating, lately I’ve wondered if things were changing when it came to the church’s general attitude and approach toward singleness. So I decided to post a question to my readers through social media asking:

“Does the church embrace singleness?”

I was heartbroken to hear the responses that came back to me as we engaged in this conversation, because deep down, I had really hoped and believed that things were changing. Though there are some signs of life and some really great responses from a scattering of people, the general consensus was a resounding, “No”!

In an attempt to change the direction of this important conversation, to voice these concerns to the body of Christ and to begin making strides toward change, I want to share a summary of the responses I received. This article is not meant to criticize church, it’s meant to move us all in the direction of correction, healing and growth.

Here are six reasons why singles feel isolated and misunderstood in church:

1. Singleness is seen as a problem to be “fixed” rather than a stage of life to be savored. Time and time again I heard from people that being single has been a topic that people have seemed to want to wish away rather than embrace. Whether directly or indirectly, the general message toward singleness has been encouragement toward finding a spouse rather than encouraging wholeness in Christ. Add to that the list of ridiculous phrases singles hear from within the church, and it’s easy to feel like you’re a project to be fixed rather than a person to be valued, loved and respected.

2. Community tends to cater to married couples and families, while singles end up feeling more isolated and alone. I have to admit that I have not been sensitive toward this topic until it was brought to my attention through this conversation. Think about this: When it comes to community, it’s far easier to connect with people in your same stage of life than it is to try and reach out to others. When was the last time a married couple or family invited a single to their house for a meal, a get together or a family outing? The church culture tends to promote unity within your stage of life rather than unity within the body of Christ. This is an area that I want to start changing in my own life and interactions with others no matter what stage of life they might be in.

3. Teaching topics revolve around those who are married or parenting. I would have to agree with this concern, as I have noticed many small groups, sermon series, sermon analogies and stories that often come from the pulpit relating to marriage or family. I understand that you can’t connect with everyone with every sermon or topic, but I also wonder what it feels like to be a single in such a couple-centric culture, unable to connect with the message or topic due to your relationship status. The interesting thing is, as I look through Scripture, I see so much more about our relationship with God and others than I see about marriage and parenting. These are two very important topics, but I can’t help but wonder if we’re missing the big picture: because a gospel-centric focus will NEVER miss the mark.

4. The church tends to highlight singleness as an issue for youth group—but then neglects to address singles in their late 20s, 30s, 40s and beyond. This truth was extracted from the dozens of responses I received about this topic, but I’ve also seen an overwhelming amount of validation through the responses I receive every week about my book and website. I have heard from hundreds and hundreds of 30s+ single men and women, excited to finally find a message for them. It’s true that a lot of talk and education about relationships happens in the youth group stage … leaving singles who are older feeling neglected and unprepared. What if we were to focus more on promoting healthy relationships all across the board no matter a person’s age? What if singles and marrieds were encouraged to come together for the purpose of learning and developing their interpersonal relationships no matter what their relationship status?

5. It’s less about having a “singles group” and more about having a “heart for singles.” Oftentimes there’s a misconception that if a church has a singles group, they are “embracing singleness.” But what I gathered from the many responses is that it’s so much less about adding a singles group, and so much more about the general culture and perception of singles within the church. What does it look like for the church to embrace singles into the body of Christ? What does it look like to encourage them to take responsibility within the body? What could it mean to give them leadership roles, important jobs to do and invite them to feel like an important part of the body of Christ? What if singleness was seen not as a stage to pass through, but a season of life to be embraced and experienced? How would that change the culture of the church at large? I, for one, am excited to think of what these kind of changes could do!

6. Marriage is often talked about as the reflection of God’s love, while singles are left to wonder if they’re somehow missing part of that love. Without ignoring the gift of marriage and the reflection of Christ through that significant relationship, what if we were to be deliberate about accentuating and exploring the other ways we can experience God’s love? Community is such an important piece to the equation of God’s love, and throughout scripture, it’s talked about even more than marriage! Instead of making singles feel like they are missing a part of God’s love, what if we chose to redefine and teach this experience of love by learning to love one another and commit to each other in an authentic, deep and intimate way within the body of Christ? I can’t help but believe that this practical expression of God’s love would change so much, not only with how singles are embraced within the church, but  in our love and acceptance of the world around us.

So, no matter your relationship status or what the culture of singleness has been at your church, may this conversation spur us on to be deliberate about experiencing God’s love to the fullest, encouraging one another in the body of Christ and seeking to experience true community, the way God meant for it to be experienced.