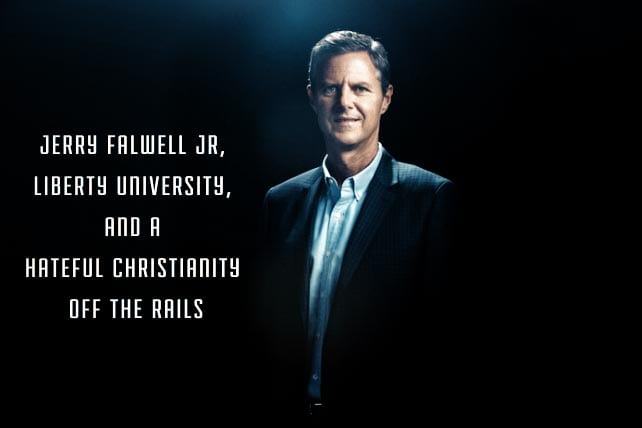 Blessed are the peacemakers, for they will be called children of God. —Jesus

On Friday, Jerry Falwell Jr., the President of Liberty University (our nation’s largest and most influential such institution), spoke the following words during the school’s convocation, to wild cheers and applause:

If some of those people in that community center had what I have in my back pocket right now … Is it illegal to pull it out? I don’t know…
I’ve always thought that if more good people had concealed-carry permits, then we could end those Muslims before they walked in and killed them.

Now, let’s put aside for a moment that Falwell’s remarks are the kind of lazy, incendiary, irresponsible language that perpetuate uninformed stereotypes, incite unnecessary fear and make violence against Muslims seem noble and justified—hate speech of the most grievous kind.

And let’s not talk about the fact that if he truly wanted to somehow lift up gun ownership as a means of protecting innocent Americans from violence by bad people, he should have name dropped white Christians, as they account for far more religiously motivated mass murders in our country than anyone, and it ain’t even close. (In most cases of bloody domestic terrorism using firearms, Falwell’s kind are the bad guy, not Islamic extremists.)

Yet even if these things were not part of the equation, Falwell’s vile comments, their warm reception in the crowd and the subsequent social media defense from other believers illustrate just how far American Christianity has drifted from the namesake of our faith.

There’s a sad, pathetic irony at play when the loudest, most brazen gun advocates are those whose faith tradition rests solely on the shoulders of a man who allowed himself to be unjustly beaten, tortured and executed; who never used his power to do anything but heal and feed and bring peace.

If we can no longer see this as a profound disconnect, if we no longer see the massive chasm between the two, we are simply devoted to worshiping a God of our own design, one who caters to our fears and preferences; a militant, white Jesus made in our own angry image—most certainly not the one from the Gospels.

Falwell and so many white Evangelicals like him have existed so long in a cloistered religious bubble, hunkered down in a fear-filled bunker perpetually preaching to their own hateful choir, that they’ve lost any perspective on the Christ they’re supposed to be living for, reflecting and sharing with the world.

They have gone so fully off the rails as an institution that Jesus no longer seems the primary concern. His actual life, ministry, mission and manner are inconsequential and frankly bad for business, because they are based on faith that transcends fear, on gentleness in the face of oppression, on benevolence as a response to violence. These are counterintuitive, countercultural virtues born out of a grassroots movement that soundly rejected power and aggression, and they all fly straight into the face of the thing Falwell and those like him have built: a perpetually angry, privileged faith forever in search of more real estate and greater dominance.

As a result, they no longer seem to care whether or not they are emulating or honoring Jesus, just capitalizing on his name recognition. They have veered wildly from the plot and either they can’t or refuse to see it.

Liberty University should be embarrassed of their President’s glorification of violence.
Falwell should be disciplined.
He should apologize to the Muslim community.
He should apologize to the Christian community.
He should repent earnestly.
Liberty University students should fully condemn his statements.
High profile Christians should call him out.
The Evangelical Church in America should hold his rear end to the fire.

But chances are none of these things will happen because there’s too much money flowing through the system, too many profitable political fornications at risk, too many young ministry minds to be poisoned and too much fear too be leveraged and manipulated in the pews.

Jesus deserves far better than this.

He deserves to be accurately represented in the world.
He deserves more than the bastardized version of him that people like Falwell are peddling every day.
He deserves to have his compassionate, loving, open-hearted voice elevated above the vicious spitting bile of angry white men with powerful pulpits.

We deserve better too.

Friends, refuse to be fooled by people like Falwell: This is not Christianity by any meaningful definition.
It is not Good News.
It is not Jesus.
It is not love.

Editor’s Note: We believe this a thoughtful reflection on an important issue today’s leaders must be prepared to discuss. We encourage civil dialogue in the comments section.