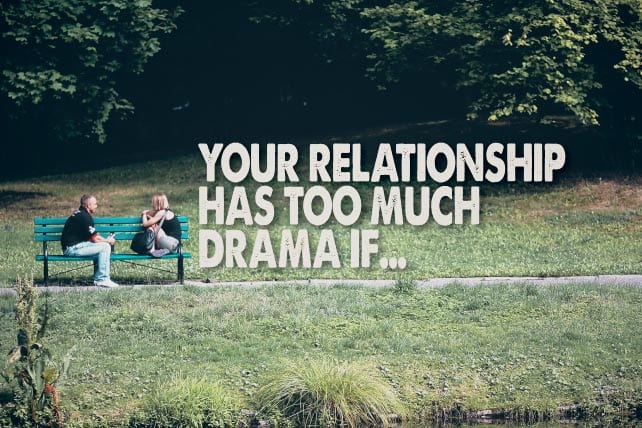 We see it as the norm. Part of the equation. A piece of the pie.

It’s a mentality that is seeping into the walls of our churches, wreaking major havoc.

I’ve spoken to one too many young man or woman, and received one too many emails, that remind me of how present relationship drama is … even among believers. But from my understanding of relationships, they were never made to be “dramatic”: unstable, unpredictable, harmful and full of pain.

If you find yourself in a dating relationship that’s starting to resemble an episode of Couples Therapy, you might ask yourself what is really going on, and why you’ve allowed yourself to stay.

Your relationship has too much drama if …

You are on again off again more times than a game of musical chairs.

You spend more time arguing than you do actually communicating.

You often leave a conversation feeling frustrated and unresolved.

Your relationship is plagued by jealousy, mistrust and fear.

You are constantly having to review and rehash boundaries that have been crossed again, and again.

You feel like you’re at an amusement park—because of the constant emotional roller-coaster, but without the cotton candy.

You receive (or deliver) more criticism than encouragement.

Your friends have to regularly ask you if you’re “back together.”

You regularly find yourself sifting the truth from the dishonesty.

You or your partner regularly exchange words that are degrading, hurtful and mean.

You don’t feel the freedom to engage in open communication about how you really feel.

You’re having to deal with constant issues involving “other women” or “other men” that shouldn’t be part of the relationship.

You find yourself “getting over” problems instead of “working through” them.

You’re commonly concerned about whether or not your significant other is being faithful to you.

You often wonder if you have made the wrong choice in this relationship.

Relationships aren’t meant to be this complicated. They really aren’t. Healthy relationships are marked by peace. They happen naturally, and so they don’t have to be forced. Seek this kind of a relationship: a relationship that’s filled with life, peace, grace, maturity and the fruits of God’s Spirit. Strive for that. You owe it to yourself. Because what you see in dating—you will always, always, always see multiplied and magnified in marriage. So do yourself a favor, and quit while you’re ahead.