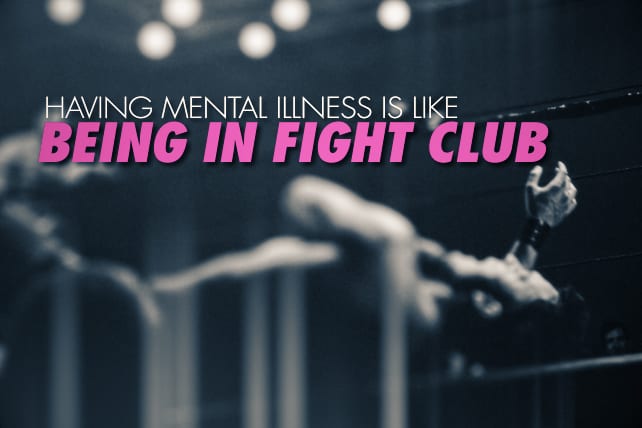 If you’ve seen the movie or read the book Fight Club, you know that the first rule of Fight Club is that you don’t talk about Fight Club.

And it turns out that mental illness shares the same first rule as Fight Club: You don’t talk about it.

Over the years, I’ve written a number of blog posts about struggling with mental illness, and without fail, I get emails and comments from people profusely thanking me for talking about the issue. They’ve struggled for so long and are so grateful that someone in the church is actually talking about it.

Because we just don’t talk about it much in church. Like Fight Club.

And trust me, I understand why we don’t talk about it. As one of the crazies, I understand just how weird mental illness is. When I’m in a spiral of depression or anxiety, I’m not a normal person. My thinking gets whacked out and I don’t want to interact with other humans. I see the world through darkened, distorted lenses, and the things that help and encourage normal Christians don’t do jack for me.

Now let me be clear about something: I don’t fault them for this.

It’s hard enough to minister to normal people, let alone whack jobs like me who don’t want to be around people.

But, I do think non-crazy Christians could do a few things differently to help us crazy Christians more effectively. (Side note: I have no specific person or church or pastor in mind here. This was not written TO anyone. You’re so vain you probably think this post is about you.)

Here are just a few recommendations…

(Other side note: This isn’t meant to be one of those self-pity party, NO ONE UNDERSTANDS ME type posts. I really just want to give voice to a common struggle so we all can serve each other more effectively.)

Many people assume that things like anxiety and depression are the same as worry and unbelief. This assumption then leads them to say things like, “You just need to believe God’s promises more,” or, “You need to put this worry to death.”

But I can assure you, both from my own experience and from talking to others, that mental illness is not the same as sin. Yes, there are many times when depression and unbelief are symbiotically interwoven. Yes, bodily anxiety can often tempt a person to sinful worry.

But most of the time, I feel awful for no reason whatsoever. I simply wake up with my heart racing or my head stuck in a black cloud of despair. It’s not that I’m doubting God’s goodness or in a state of atheistic unbelief. I’m not actively worrying about anything.