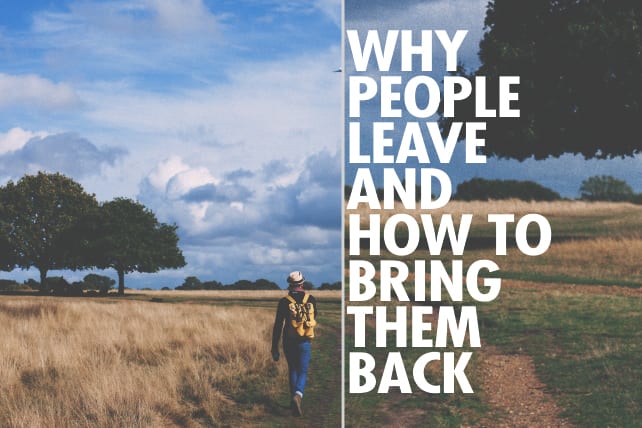 Do your neighbors go to church? If not, do you know why? Their reasons are probably not the ones you’d expect. New research reveals why people leave churches and what you and your church can do to bring them back.

The email subject line simply read “uh-oh.” Hesitant to open the message from his friend Justin, Erik reluctantly clicked to see only a link. Again, he clicked. Up popped an article on a popular news Web site about yet another controversy in the evangelical church.

Erik wasn’t angry. In fact, he was well acquainted with his friend’s cynicism about the church. Quickly, he typed a pithy response: “And what are you going to do about it?!”

But before he hit “send,” a nagging feeling in his gut suggested that his clever reply wasn’t the best response. Instead, he took the high road and once again ignored his friend’s quips.

Justin is like many people. While he once faithfully attended a local church, he no longer goes. He claims he’s a Christian, disillusioned by the problems he’s seen in his local church and other churches. He hasn’t darkened the door of a sanctuary in several years.

Recently, LifeWay Research (lifewayresearch.com) conducted a survey of formerly churched adults in America, hoping to uncover certain trends about the de-churched. While our results gave a great deal of insight into the minds of the formerly churched and why they left, they also revealed some common themes on how to bring them back. Our findings were cause for both worry and encouragement.

Most of us know someone like Justin who no longer attends church. And it’s no surprise that the U.S. Church is in a general state of decline. The magnitude of the decline, however, is staggering. Of the 300 million people in the United States, fewer than 20 percent regularly attend church. And our research suggests that close to 7.9 million people may be leaving churches annually. Crunch the numbers, and you realize that our churches are probably seeing more than 150,000 people walk away each week!

Why did they leave?
The overwhelming numbers of this exodus motivated us to discover the reasons behind it. Our research revealed several common themes as to why such a sizable segment of the local church body is choosing the exit door.

Change in life situation
The number 1 reason for leaving church is a life change that prompted people to stop attending worship. In fact, almost 60 percent of de-churched people said that some adjustment to their lives is the primary reason why they no longer attend church.

Specifically, one-third of the formerly churched believe they are simply too busy for church. To them, life changes—often family or home needs—are as important or more important than attending a local church. Several people reported that family responsibilities were causing them to feel too busy to attend church. And women (64 percent) are more likely than men (51 percent) to feel this increased pressure from home responsibilities.