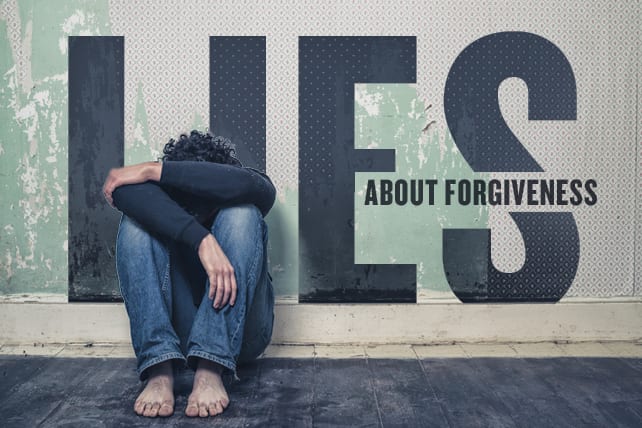 A few years ago I read a fascinating book called The Bishop of Rwanda, by John Rucyahana. He talked about the horrible genocides in Rwanda, and the aftermath of the civil wars there. He said that the genocides were, obviously, horrendous, but it was the lingering bitterness and hatred afterward that was the most difficult. Most people couldn’t even consider the idea of forgiveness.

Rucyahana pointed out that the obstacles to forgiveness really came from lies people believed about forgiveness. These three lies are as applicable in big cases (like his) as they are in our more everyday cases of forgiveness.

Lie #1: You must wait until the person shows they’ve repented.

Well, to put it bluntly, Jesus didn’t. He forgave his enemies on the cross, at the very moment they were killing him. Forgiveness isn’t the same as reconciliation. With reconciliation, you need both sides to come to the table. But forgiveness is first about releasing you from bitterness, only second about fixing the relationship. Sometimes the relationship is never fully healed; sometimes our forgiveness is a huge step toward it being healed. But our responsibility is to forgive either way.

Lie #2: Forgiving somehow “lessens” the value of the victim or the offense of what the offender did.

People get this confused a lot. They assume that forgiving an offense is the same as saying, “That wasn’t that bad after all.” No, that’s “excusing” or “minimizing” it. You excuse someone when they accidentally step on your toes. No harm, no foul. But forgiveness isn’t like that. Forgiveness stares right in the face of evil, calls it evil, but then chooses to leave the vengeance to God.

The irony here is that victims who refuse to forgive think they’re somehow getting back at their offender. But the real person being hurt in unforgiveness is the victim. Forgiveness isn’t a law to obey, but a path to freedom. Unforgiveness, on the other hand, is like taking poison and expecting someone else to die. It’s choosing to stay trapped in a jail cell of bitterness, serving time for someone else’s crime.

Lie #3: Forgiveness is a feeling; you can’t really do it until you feel it.

People imagine that forgiveness is an experience like falling in love or getting rained on: You can’t control it; it just happens to you. But that’s completely backwards. Forgiveness isn’t a feeling—or, at least, it can’t start as a feeling. It starts as a decision to not hold someone accountable for what they’ve done.

But the beauty of forgiveness is that the feeling does come. What C.S. Lewis said about love is true about forgiveness, too: The more we act like we love someone—doing the kind thing, assuming the best intentions—the more we’ll find that our feelings follow our actions.

There’s a beautiful example of this from the life of Corrie Ten Boom, the Dutch Christian who spent years in a concentration camp for helping Jews escape the Nazis. Some of the guards there were horrible to the women in the camp, and there was one particularly that she described as especially loathsome.

Several years after the war, Corrie Ten Boom was speaking at a church service—about forgiveness—when afterward an old man stepped forward. She immediately recognized him as that same guard. He told her how he had become a Christian after the war. Then he extended his hand and asked, “Do you forgive me?”

I’ll end with her words:

“I had to take the man’s hand. I knew that. The message that God forgives has a prior condition: that we forgive those who have injured us. I told myself, ‘I can lift my hand. I can do that much. Jesus, you supply the feeling.’ And as I reached out my hand, an incredible thing took place. The current started in my shoulder, raced down my arm, sprang into our joined hands. And then this healing warmth seemed to flood my whole being, bringing tears to my eyes. ‘I forgive you, brother!’ I cried. ‘With all my heart.’ For a long moment we grasped each other’s hands, the former guard and the former prisoner. I had never known God’s love so intensely as I did then.”