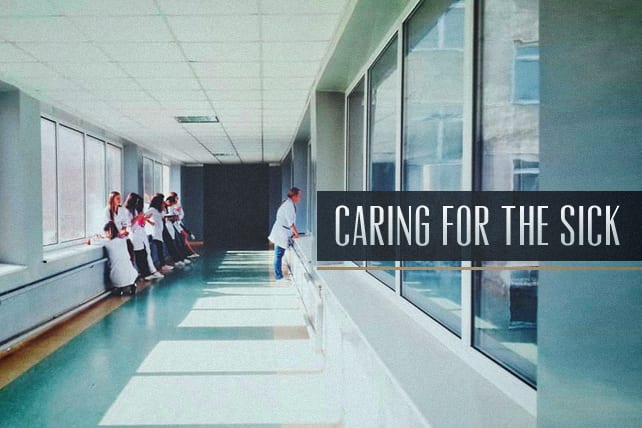 The Christian approach to pain, suffering and sickness is compassion, mercy, tenderness and caring. Matthew records, When He saw the crowds, He felt compassion for them, because they were weary and worn out, like sheep without a shepherd (Matthew 9:36 HCSB).

– He didn’t write off their illness as an illusion.

– He didn’t blame them for their illness.

– He didn’t discourage them or tell them to give up.

He had compassion. If you’re going to be like Jesus, you have to learn to be compassionate toward people when they’re sick.

Millions of people are suffering unnecessarily from preventable and sometimes curable diseases. Three hundred million people will contract malaria this year, but we know how to prevent it and treat it. Every day three thousand children die of a mosquito bite.

And then there are the diseases we don’t have a cure for yet, but we’re working on it. Three million people die each year from HIV/AIDS. We don’t have the cure yet, but we do know how to prevent it.

We cannot delay. We cannot procrastinate. If we’re going to be people of compassion, we can’t wait any longer.

There are seven ingredients in caring for the sick.

God intentionally allows sick people in your life to give you the opportunity to learn to love. Those people are not accidentally in your life. Who’s our model for this? God. The Bible says in Psalm 106:44, God saw their misery and heard their cry.

I was sick inside with sin. I needed God, so He showed up in my life. He offered his presence. That’s exactly what God asks us to do for each other. He wants us to give our presence to each other in moments of need.

One of the illnesses that we need to de-stigmatize is HIV/AIDS. It’s considered a sexually transmitted disease, so people wind up feeling an extra sense of judgment and rejection when they suffer with it. Too many people have been fired, shunned and banned from being part of an organization because of HIV/AIDS. But Jesus welcomed those stigmatized by illness into his life, and we should as well.