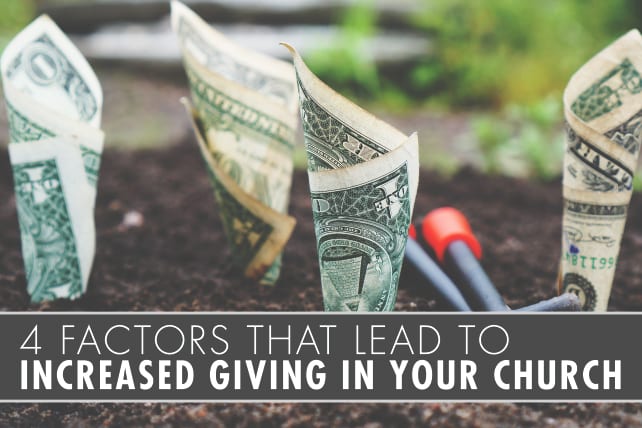 I had a conversation with a pastor last week who told me that the giving in his church was on the rise and he asked how he should interpret that.

Normally, we only do an analysis to understand what’s going on when the giving decreases. That’s necessary and can be helpful, but it’s mostly playing defense.

It’s better to know how to interpret giving when it’s increasing, so you can understand it in the moment and lead accordingly.

You might consider this semantics, asking, don’t we use the same factors to understand giving regardless if it’s increasing or decreasing? Yes, to some degree that’s true. But deliberate cultivation of generosity when it’s increasing is the wiser stewardship because it’s proactive rather than reactive.

In other words, it’s like attendance. When a leader says to me, “My overall church attendance is increasing rapidly, but I have no idea why,” he or she can’t learn from or leverage the momentum. They are so excited and grateful, they receive the attendance as a gift and think, “I don’t know why I’ve received this gift, but I’m sure happy about it.” That’s a great attitude, but not the best leadership.

More importantly, if you don’t know why it’s increasing, you are less likely to understand why it’s declining, (if or when it does), and therefore, it takes you longer to change the course of giving.

If you only know why your attendance is decreasing, you are always reacting and playing catch up to a problem, rather than seizing the power of momentum. It’s the same with the giving in your church.

So, here are the factors the pastor and I discussed to help interpret an increase in giving.

1) A positive response to the vision.

If your giving is up, take a look at what you have been doing to communicate the vision and how the congregation is responding. Ask yourself why it’s working. Learn from it, ask questions of key leaders to discover how they are responding as well. Continue to refine and bring clarity to the vision and how you communicate it. A real test of vision is whether or not the congregation takes action.

We know that giving follows in tandem with the increasing spiritual maturity.

As believers learn to trust God and obey His word, giving is part of a natural expression of faith. It’s rare that a nominal believer consistently practices percentage giving. When giving is increasing, be keenly aware of the spiritual dynamics in play from the prayer life of the congregation to their hunger for the Word.

What practices seem to be increasing and why? When can you learn and leverage to help people continue to mature in their faith?

3) Confidence and trust in the senior pastor.

In general, people will not give to the church where they don’t have confidence in the leadership of the pastor. And they certainly don’t give if the pastor is not trusted.

The more extreme examples need no explanation, but this is often difficult to discern in the more moderate illustrations. For example, if the pastor is liked, but doesn’t seem to have a clear direction of where the church is headed, the confidence of the people is likely low.

Strong giving is not only an indicator of mature and obedient believers but also that they have confidence in the leadership of the pastor. If you are not sure, one of the best ways to know is to ask several trusted leaders and confidants in the church, such as board members, prayer partners, and one or two key staff.

4) Relationally connected with others in the church.

People always feel more connected when they share meaningful relationships with each other as part of the congregation.

There are two primary long-term points of connection. They are small groups and serving.

Small groups carry a strong sense of community and belonging as people open up, get to know each other, pray and support each other in their everyday lives.

Serving teams often carry an even stronger sense of community because of the bonding that takes place when people serve together on a team focused on a particular goal or mission.

There are obviously other factors at play when it comes to increased giving such as the possibility that a single large gift caused the offering to increase substantially that month.

I’m more like the pastors who are just grateful when God blesses. I have caught myself saying, ‘You know, I’m not sure why the giving is so strong, but I’m very grateful.” That’s obviously not a bad thing, but the leader in me needs to be grateful and have a good understanding of God’s blessing. That enables me to lead farther and extend God’s Kingdom to the greatest potential. That will help you too.