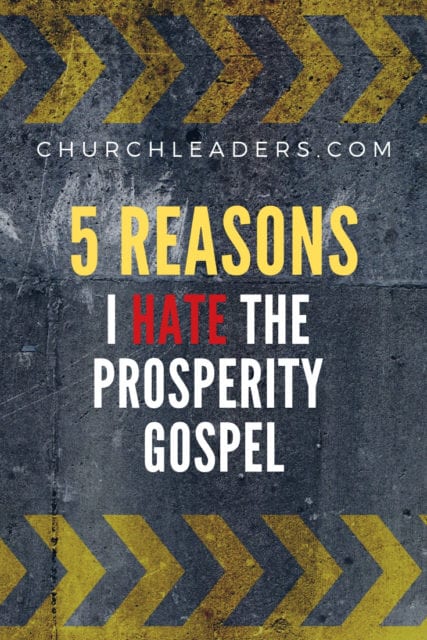 I hate the prosperity gospel because it has become mainstream.

Have you ever been tossed by a wave in the ocean? I remember the feeling of total helplessness several years ago during a morning surf in California. Forecasts predicted 10-foot swells so a couple friends and I packed up our egos and went out to surf. Fast forward to me gasping for air and getting crushed by wave after wave as the sets rolled in with little relief. I had no business being in the water that day. Nothing is more disheartening than being crushed by the momentum of something you cannot control. Similarly, I hate the prosperity gospel because it has produced a massive wave of destruction across the globe. Worst of all, that wave of destruction has become mainstream. People want it (2 Timothy 4:3-4). From America, to Africa, to South America and beyond, the prosperity gospel is en vogue.

If you hate the prosperity gospel as much as I do, the most loving thing you can do is speak the truth to those who need to hear it the most.

American Gospel: Christ Alone has released and quickly become one of the most impactful documentaries on the prosperity gospel to date. Brandon Kimber directed and produced this film to help people understand the difference between the gospel of the Bible and counterfeits being sold today. Numerous testimonies are already pouring in from people who held “watch parties” as a tool for outreach to friends and family being deceived. Watch it on Vimeo on Demand today. Here’s the trailer.

In order to combat some of the evil spreading through prosperity theology today, I chose to write a book that deals with it head on. It includes a thorough look at life behind the scenes, and plenty of biblical teaching to help people grow in truth. The book is titled God, Greed and the (Prosperity) Gospel and is being published by Zondervan. You can pre-order it on Christianbook.com (currently discounted at the time of this article) or Amazon right now. Other outlets will carry it in the coming months.