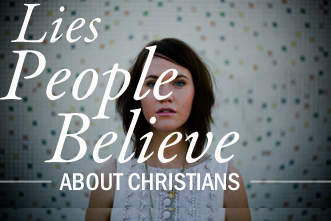 Are all Christians judgmental jerks, out to convert you at the drop of a hat? Maybe, but not most of the ones I know.

Yet we all know there is a long history of people misunderstanding and flat out not knowing what Christians are really like.

I don’t want to pick a fight, but I do want to set the record straight.

Here are the top 5 lies about Christians, starting with our so-called “lack of intelligence…”

This one really irks me, I’ll admit.

Many people, in my experience, (especially atheists) seem to think that in order to believe in God, somewhere along the line, you had to trade in your brain for a bowl of mush.

There is a perpetual misunderstanding, in which people equate faith with a lack of intelligence, logic, or both.

The truth is almost every Christian I know has not only had to spiritually and emotionally choose God but also intellectually reconcile their faith, as well.

Christianity does not create brainwashed individuals but rather individuals who have personally grappled with questions of eternity, moral sin, creation, and the like.