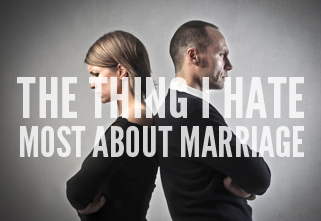 There is so much to love about marriage. If you frequent this blog (which I hope you do ’cause I think it’s pretty awesome), you have no doubt read some of the mushy-gushy things my husband and I have to say about one another.

I think marriage is bliss. I think more people should be married and, of course, stay married.

On the flip side of that coin, however, there is something I hate in marriage. This particular action makes me visibly agitated and uncomfortable. I also think this thing is one of the most destructive behaviors within marriage.

So what am I talking about?

Nothing makes my skin crawl like watching one spouse belittle, demean, or disrespect the other spouse. Yes, I know I’m tricky because while this isn’t happening in my own marriage, that doesn’t mean I can’t stand witnessing it in other marriages.

Not to pick on the ladies, either, but most of the time when I have witnessed this behavior, the woman is the guilty party.

I had one friend, early on in marriage, who would talk to her husband, in front of our group of friends, as if he were a dumb, useless idiot. I would always leave their company feeling so sad for him…and for their marriage.

I wondered how he could maintain any sense of manliness, dignity, or leadership when his wife was continually treating him like a boy.

Yes, I should have said something. Looking back, I wish that I had spoken up. But alas, I did not, and I can’t help but wonder if this is still going on in their marriage.

Dennis Prager, my favorite radio show host, has discussed the issue of public belittling on his show frequently. He suggests that the act of publicly humiliating your spouse is actually more harmful (in the long run) than a one-time affair.

Initially, upon hearing this, it might sounds plain ridiculous. However, he explains that a one-time affair, while extremely painful, is just that–one time–whereas a lifetime of constant public humiliation and disrespect is simply toxic.

That toxicity can then begin to produce resentment. I have heard it said by a marriage expert that resentment is essentially the one thing a marriage cannot survive.

So, why does it happen?

If we know public disrespect of a spouse can lead to an unhealthy marriage, then why does public humiliation or disrespect become a pattern in some marriages?

I think many women do not understand what it really means to respect one’s husband. They do not realize that all of the little remarks, eye rolling, snickering, and disagreeing in public can equal a highly disrespected man.

In my own marriage, if my husband and I are in mixed company and I want to tell a story about him that I suspect he might find embarrassing (which is difficult to do, because the man does not get embarrassed), I always pause to ask his permission to share the story.

If he says “No,” then out of respect I do not share the juicy story. Likewise, he gives me the same treatment.

My mother-in-law says that parenting is 10% watching and 90% respecting your child’s personhood. Respecting their personhood means treating them like we would treat an adult (to some extent). We wouldn’t yell at an adult, be rude, or generally unkind to an adult, so why would we treat our kids this way?

The same thinking follows in marriage. Why do some people think that, just because you are married to someone, you reserve the right to talk to them (and even in public) like they are pond scum?

Yet, despite what could be a detrimental behavior within marriage, I have also known many couples who have acknowledged their failing in this area and transformed their marriages.

One of the most powerful catalysts for change is the book, Love and Respect, by Dr. Emerson Eggerichs. Beyond the book, there is an entire Love and Respect ministry that offers workshops, conferences, DVDs, and more (they did not slip me some incentive to promote them either; I just happen to love the ministry and have seen it change marriages).

Marriage takes effort, a willingness to serve, and constant commitment. Throwing public humiliation into the mix is both harmful and unnecessary. May we love our spouses with our actions and our words.

Do you agree or disagree? What do YOU think is the most destructive behavior in marriage? Have you ever known a couple (including yourself) who has struggled in a certain area? How has God showed up?