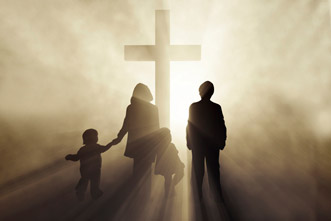 Echoing Jesus, Paul examines worship and idolatry brilliantly in Romans 1:18-32 by contrasting the lie of idolatry with the truth of worship. His thesis statement on all of this is Romans 1:25, whfich speaks of idolaters who “exchanged the truth about God for a lie and worshiped and served the creature rather than the Creator, who is blessed forever! Amen.”

The Truth: Two-ism
The truth is what we will call two-ism. Two-ism is the biblical doctrine that the Creator and creation are separate and that creation is subject to the Creator. Visually, you can think of this in terms of two circles with one being God the creator and the other containing all of his creation:

The Lie: One-ism
The lie is what we will call one-ism. One-ism is the pagan and idolatrous doctrine that there is no distinction between Creator and creation, and/or a denial that there is a Creator. The popular word for this notion is monism. Practically, one-ism is the eradication of boundaries and differences to bring opposites together as one. The materialistic form of one-ism is atheism. Spiritual one-ism is also often called New Age, New Spirituality, or Integrative Spirituality.

According to spiritual one-ism, the universe is a living organism with a spiritual force present within everything. Thus, everything is interconnected by the life force or the world soul. This life force manifests as spiritual beings (Christians realize these are demons) that manipulate the course of world events. These spirits can be influenced to serve people by using the ancient magical arts. Humans possess divine power unlimited by any deity. Consciousness can be altered through the practice of rite and ritual. Magic is the manipulation of objects, substances, spirit entities, and minds, including humans and demons, by word (ritual, incantations, curses, spells, etc.) and objects (charms, amulets, crystals, herbs, potions, wands, candles, etc.).

Visually, you can think of this in terms of one circle in which everything is contained and interconnected as one:

Often, the circle itself serves as the defining symbol of pagan idolatry. This includes the yantra circle used for Hindu worship, the mandala circle of dharma and Dharmacakra used for Buddhist and Taoist worship, the sun cross used by Wiccans (who also gather in a circle), and Native American medicine wheels, dream catchers, and drum circles. A well-known expression of one-ism is found in the popular song from The Lion King that speaks of “the circle of life.”

Excerpted from Doctrine: What Christians Should Believe, By Mark Driscoll, pgs. 342-344. Used with Permission.