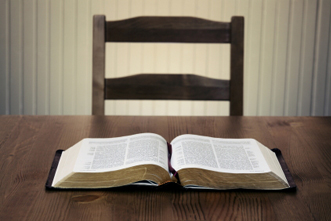 I talked this morning at our Friday morning chapel on why sound doctrine grounds and leads to effective action for good. I asked six questions in my message:

Here’s part of what I had to say on my first point:

To show that the Bible teaches that sound doctrine is the foundation of good works and leads to good works, there are two pieces of evidence I want to look at: Titus 3:4-8 and the “do you not know” passages in 1 Corinthians.

But when the goodness and loving kindness of God our Savior appeared, he saved us, not because of works done by us in righteousness, but according to his own mercy, by the washing of regeneration and renewal of the Holy Spirit, whom he poured out on us richly through Jesus Christ our Savior, so that being justified by his grace we might become heirs according to the hope of eternal life. The saying is trustworthy, and I want you to insist on these things, so that those who have believed in God may be careful to devote themselves to good works. These things are excellent and profitable for people.

But what are “those things?” Doctrine! He is referring back to what he had just stated, which was that God saved us apart from our works so that, being justified by grace, we would become heirs of eternal life. By insisting on that truth, believers become engaged in good works.

We see here two very significant things: First, Paul sees a relationship between doctrine and practice. Specifically, understanding doctrine leads to and causes good works. Note that the connection is not simply that sound doctrine is the foundation for action. It is more than that. Sound doctrine causes effective action. “Insist on these things so that those who have believed in God may be careful to devote themselves to good works.” Doctrine is not just a foundation for good works, which are then driven by something else. Rather, sound doctrine causes good works.

Second, it is significant that the primary doctrine in view here is justification by faith alone. In other words, the chief doctrine that leads to Christian’s being devoted in good works is the doctrine that God saved us “not because of works done by us in righteousness” and that we are thus “justified by his grace.”

I then went on to show how Paul’s “do you not know” passages (for example, 1 Corinthians 6:1-3) also indicate that the Bible sees a relationship between doctrine and good works (and doctrine and avoiding bad works) such that doctrine, rightly understood and loved, leads to good works.

In these passages, Paul is discussing various behavioral problems in the church—that is, sin and the lack of good works. And his remedy to these issues is not to say first “you better get your act together,” but rather to appeal to something they should know. In other words, Paul’s assumption is: “if you really knew and remembered this truth, you would not be acting this way.” The assumption is: proper belief leads to right behavior.

What we see here is that the Bible teaches that sound doctrine is the basis for right action and, in fact, leads to and causes right action.