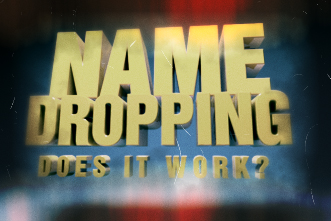 There’s this thing about name-dropping: It works.

That’s right. It works. That’s what makes name-dropping so insidious.

Name-dropping happens when people don’t know who they are. They use the reputation of other people to prop themselves up. It’s like an emotional version of Weekend at Bernie’s.

When you can loosely affiliate yourself with another person of equal or greater stature, in whatever haphazard fashion, you appear greater. More powerful, influential, or wanted.

You reap the rewards with little to no consequences. (At least, that’s what you think.)

While name-dropping might work in the eyes of others, there’s ultimately a price to pay. That price? Your soul. Your soul believes the lie that who you are isn’t good enough, smart enough, or liked enough to make it in the real world.

The next time you’re about to tweet about a 10-second conversation you had with so-and-so, blog about all the people you know (or think you know), or update your status with all the amazing places you’re going (even if you’re stretching the truth with some of them), ask yourself a question:

Why am I sharing this?

If you can’t come up with a good reason, well, yeah. Chances are you’re name-dropping. And you’re better than that.