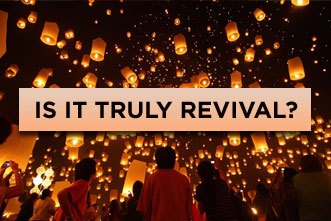 David Bebbington, who has given us the oft-discussed “Bebbington’s quadrilateral” for defining evangelicalism, has also demonstrated at least five different ways that scholars and other students of revival have defined the phenomenon.

1. Revival can mean a personal spiritual awakening experienced by an individual, frequently after a season of spiritual backsliding (think a spiritual “rededication”)

2. Revival can mean a planned series of meetings held by a congregation or a group of congregations (think spring revivals or citywide crusades)

4. Revival can mean a spontaneous spiritual event that affects a group of congregations or even an entire region (think the Welsh revival of 1904–05)

5. Revival can mean a spiritual movement that affects culture at large, spreads to other regions, and lasts for a more extended period of time (think the transatlantic awakenings of 1739–48 and 1857–1861)

I think this sort of list is helpful. If you’re like me, you’ve heard all (or at least most) of these experiences referred to as revival and/or spiritual awakening. Four of them are various types of spiritual experiences, while the fifth (planned meetings) can be instrumental in bringing about one or more of the other four experiences. In fact, it’s possible that all five of these phenomena could converge into a single, larger experience.

Perhaps we should think of revival as a time of spiritual renewal and numerical growth that can manifest itself in a number of different ways. It can be totally spontaneous, or it can be sought intentionally though various spiritual disciplines (prayer, repentance, etc.). When revival is manifested in a corporate context, it is often a catalyst for innovation and creativity, which is well received by some and rejected by others. It often, though not always, includes both an element of revitalization and an element of conflict, especially between those with different perceptions about the experience and/or its repercussions. Revival isn’t a permanent phenomenon, but it eventually ebbs, creating a sense of longing and expectation among those who wish to experience it anew. Historical revivals and their results (good and bad) have fundamentally influenced how various evangelicals think about conversion, spirituality, Christian maturity, worship, evangelism and missions, cultural engagement, and just about everything else. Revival movements are having similar effects among evangelicals, especially continuationist evangelicals, in the Global South.

For my part, I’ve experienced the first type of revival and participated in many instances of the second type of revival. I’ve personally witnessed the third type of revival on at least one occasion, though not in a church of which I was a member. I’ve not been a part of the fourth and fifth types of revival, though I study them regularly, both professionally and for my own edification. I pray for revival in my church, in my city, and among American evangelicals in general and Southern Baptists in particular.