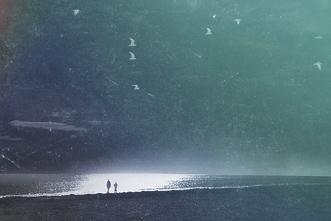 It was a beautiful, sunny morning. My wife and I were sitting on our porch, enjoying a rare, completely undisturbed moment together, when a white sedan drove up our laneway and stopped a few feet from us. The well-dressed driver got out, while the young woman remained in the car. I could see it in an instant. I looked at my wife, Nancy, and whispered: “Jehovah’s Witnesses. I’ll take care of this.”

“The issue,” I said, “is not how I will deal with the problems of the world. I know we are both convinced we have the answer. My question to you is this: Where will your answer lead you?” He opened his mouth to answer, except Jet Li was faster. I silenced him once again, changing the subject and asking, “Can you say you are ‘born again’?” “No, but …,” he weakly stammered. I interrupted, “There are no buts, my friend. The Bible is contrary to what your group teaches. ‘You MUST be born again’!”

I could feel the man shrivel against my now almost frenzied assault. I couldn’t stop. As I went in for the kill, I remembered the scene where Jet Li annihilates the opposition with a dizzying array of spin kicks.

“Jesus, my friend, is GOD!” I shouted into his face. I didn’t even need my Bible for this, as I boldly rattled off verse after verse. “‘In the beginning was the Word, and the Word was with God, and the WORD was God.’ John 1:1. Notice it’s not ‘a god’ as your New World Translation suggests.” I looked into the car and told the young woman she should tell her friend to use a real translation.

I wasn’t done yet, not by a long shot. I started pacing back and forth. My congregation of one and his car-sitting sidekick stared bewilderedly at me. As the man tried to interject, I went on: “He is ‘God OVER ALL’ Romans 9:5? ‘In him the whole fullness of DEITY dwells bodily.’ ” I then repeated those words for emphasis: “FULLNESS OF DEITY!”

The man seemed extremely agitated by this point. But here came my spin kick. “One last thing,” I said, “and then you can say whatever you would like in response. In Revelation 1:17-18 it says: ‘I am the first and the last, and the living one. I died, and behold I am alive forevermore, and I have the keys of Death and Hades.’ Who do you say that is?”

“Don’t answer,” I replied to my own question, “We both know it’s Jesus. Dead and alive. First and Last. Interesting, isn’t it? Who does the Old Testament say was ‘the first and the last’?” By this time I noticed he no longer even tried to interject. He just said, “Why don’t you tell me.”

Further emboldened by such a concession, I looked into the window of the automobile at the stern, almost disbelieving look on the young woman’s face and told her next time she should request to go with someone who knew his Bible. Then I turned back to the man and said: “In Isaiah 44:6 it says, ‘Thus says the Lord, the King of Israel and his Redeemer, the Lord of hosts: I am the first and I am the last; besides me there is no god.’ ” I amazed even myself; and it had all taken less than ten minutes.

I then looked at the man and said: “I’m finished. What have you got to say?”

He looked back at me and replied: “Well, I can tell you this. I promise I’ll never become a Jehovah’s Witness, but do you know where the Monaghans live?”

Somehow (I’m not sure how, but somehow), when I realized he had just stopped to ask for directions, I managed to give him directions to our neighbors’ home. I somehow also mustered up the strength to wave as they drove off down our laneway.

The “good” side of this is two-fold. First, I did rattle off numerous Scripture verses, and I was partially able to comfort myself, knowing “the word of God never returns to God without achieving the purpose God intended.”

Second, it made me think. I wondered: “Is this possibly how I come across when I preach?” I recognized how easy it is for me to deal with “lost” people in an arrogant, overbearing way that loses them further, while, at the same time, thinking how great I’ve been. I realized if my Gospel as well as my demeanor isn’t filled with grace and love, I’m not some masterful preacher or well-spoken Christian but simply “a noisy gong, or a clanging cymbal” (1 Cor. 13:1).

People need more and more of the gracious Jesus who invites them to Himself (“Come to me, all who labor and are heavy laden, and I will give you rest,” Matt. 11:28). People’s lives are beaten down enough. They don’t need more of it from the pulpit. They need Jesus, not Jet Li.