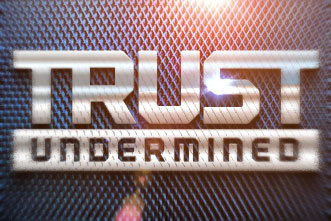 As I mentioned in last week’s post, a leader’s blindspots are her worst enemies. After all, it’s the obstacle you can’t see that’s most likely to take you out.

Continuing along the same line, I thought I’d share five common behaviors I see leaders do that undermine their team’s trust.

Keep in mind that these are blind-spot behaviors for most leaders—that is, they do them innocently, and do not realize the impact they have on the team’s trust.

Leaders are notoriously overscheduled, and often crunch meetings back to back to back throughout the day with no breathing room between. The inevitable effect is that leaders are often late to meetings with their team.

One leader I know came to a meeting almost 10 minutes late and declared, “Sorry I’m late, but it was important!” You can almost hear the “ … and you’re not!” at the end of that statement, can’t you?

Showing up late conveys the unintended message of, “My time is more valuable than yours. My work is more important than yours. You are here to serve me, not the other way around.”

Simple solution: Build in 10-15 minute breaks between every meeting of the day. Show up on time. And when you can’t, text or call ahead to let folks know when you’ll arrive.

2. Make a joke at a team member’s expense.

Humor is great on a team. Sarcastic humor is not. Ever.

Even if team members say it doesn’t affect them, don’t believe it. As someone in a position of authority over others, your words carry more weight than they would if you were “just friends.”

Making fun of someone on your team, even in a lighthearted way, often has the subtle effect of causing them to doubt your trust in them, which in turn makes them unsure they can trust you.

Simple solution: Ban mocking humor from your conversations with team members. Instead, why not toss out a word of gratitude or encouragement? “So thankful for you!” or “I know you’ll do great.” Easy.