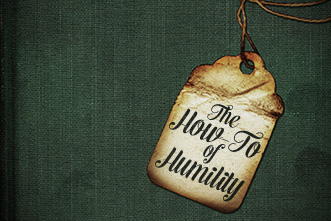 Another one of my favorite quotes is by Muhammad Ali: “It’s hard to be humble when you’re as great as I am.”

I think, deep down inside, most of us think of ourselves a lot like Muhammad Ali. Only most of us are smart enough to know not to say it aloud. If we don’t think we are great, we’re depressed because we think we should be great.

I think that’s why Peter says to “clothe yourselves, all of you, with humility toward one another.” Humility isn’t natural to fallen humans. But when Jesus saves us and fills us with his Spirit, we begin to change. It doesn’t happen automatically. We must make an effort—clothe ourselves—with humility.

We must put humility on. This doesn’t mean we fake it, but that we begin to do it, even though it takes effort. Putting on humility isn’t easy. After all, it’s not easy to be humble when we’re as great as we are. But it can be done.

Here are a few suggestions for how to put on humility:

And while you are listening, don’t try to think of the next thing you’re going to say. If you find yourself interjecting, “But … But … But,” it’s usually a tip-off that you’re probably not listening. And sticking your fingers in your ears and saying”Ah-ba-ba-ba-ba” is not a real good sign you’re listening either.

A sign you’re not teachable is if you can’t wait for people to stop telling you something. You keep thinking, I know that, I know that … yes, I already know that—aargh! I know everything you’re going to say in advance.

Don’t blame others for your sins.

Don’t be so sure you’re right all the time.

Take an interest in others.

Here’s another top-secret tip for you—other people are really interesting and fascinating. Probably not as interesting and fascinating as you, but try to take an interest in them anyway. A humble person tries to draw others out. Here’s how you can do it—ask them questions about themselves. For example,“Oh, so you are into beekeeping? How did you ever get interested in that bor–I mean, fascinating hobby? How many times have you been stung? Have you ever gone into anaphylactic shock? Are you any relation to Billy the Exterminator?” Humble people are interested in others.

Say, “Please forgive me for … ” rather than, “I’m sorry if … .” Don’t say, “I’m sorry if you were offended by my oh-so-tactful comments. I’m sorry you’re so dang sensitive and immature that I can’t call you an idiot without you getting all in a dither about it.”

Ask for prayer for areas of weakness and temptation.

Clothe yourself with humility. Cover yourself in it. If God’s command alone isn’t enough, then do it for this reason—“God opposes the proud, but gives grace to the humble.” You don’t really want God opposing you, do you? And you want God to give you grace—favor—right?