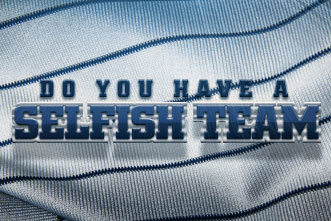 If you’ve ever been on a team, you know that from time to time you’re going to come across a ball-hog. You know the type, a selfish player whose goal is to become a human highlight reel in order to get to the next level. They don’t care about the team or respect the game. In fact, they use the game and the team to get what they want, which usually means notoriety and the admiration of others. The sad truth is that this doesn’t just show up on the field or on the court, but it shows up on church staff teams as well.

1. Selfish Players Wear Everyone Out

It’s exhausting to have a selfish player on the team. They have to talk in every meeting, their idea has be the one that is used, they have a tendency to blame others when things go wrong, and the coach has to handle them with kid gloves. An exorbitant amount of energy gets put into managing around these players, and it’s usually tolerated because of the talent they bring to the table. But the reality is, no matter how appealing it may look to have that talent on the team, eventually the price you pay in keeping them on the team ends up wearing out the team.

2. Losing With a Selfish Player Accelerates the Process

Losing is no fun for anyone. But it gets worse when you have a selfish player on the team. When you have a player that has to be the center of attention and the game starts slipping away and you begin to lose, that player simply becomes more of who they already are. They pass less, they take shots earlier in the shot clock, and they get visibly upset with other players. If you’ve got a selfish player on the team and the game goes south, everyone else on the team will have the tendency to give up and throw the towel in faster due to the lack of moral on the team.

The greatest single determining factor between a good player and a great player is that good players play their role and carry their load, while great players not only play their role but they elevate everyone else’s game by the way they play. They find the open player in transition; they know how to distribute the ball and whom to get it to in what situation. They know when to push the tempo and when to slow things down. When things go wrong, they gather the team together and look everyone in the eye and encourage the team to get on the same page. They don’t shrink back under pressure, and in clutch moments not only do they want the ball, but the other players on the team want them to have the ball.