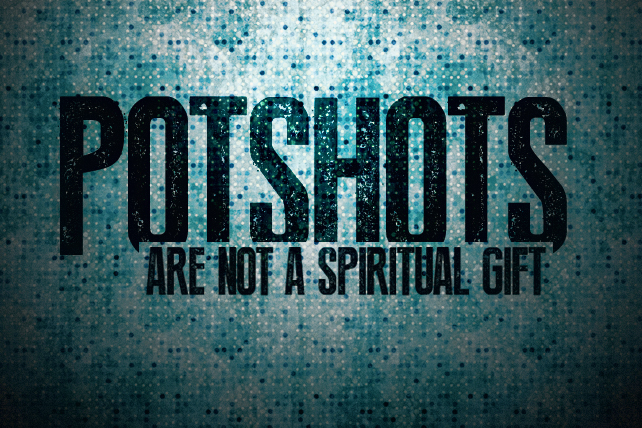 It’s a bit morose and probably an exercise in ego-massaging to consider what one would wanted inscribed on his tombstone (if indeed one has left his family enough money to buy a tombstone). But indulge me for a moment.

This can be a good exercise for us in that it requires us to think through just what our lives are made of—what will the one or two sentences in the first lines of our obituaries say when we pass? I’m not sure what that would be for me, but I can tell you what I wouldn’t want it to be.

I don’t want to be known as the guy who takes potshots at other people.

This sounds like a no-brainer, but in our social media age, it’s not a given.

In fact, I think if more people considered their reputations, the weight of their words, the impact they are having on the people who follow their activity, they’d reconsider what they type or tap into the blank spaces on Twitter.

It’s not that it’s Twitter’s fault. It’s that this medium—instant, fast and rewarding of sharp wit—dredges up from the heart the worst kinds of things. What’s more, the safe distance it gives you from keyboard to flesh-and-blood gives the illusion of courage behind a veil of insecurity.

I say all that to say this: A lifetime of worthy work can be erased in a short amount of time if you’re someone who uses Twitter to continually sound off, take potshots and be the self-appointed watchdog for the masses you think have made you their leader.

This is especially true and sadly prevalent in the evangelical world. You can easily take potshots—that have all of your tribe saying comatose amens—pretty easily.

You can skewer the theological tribes with whom you disagree and make a living pointing out their blind spots, hashtagging their crimes and gathering a willing lynch mob.

You can create narratives, half-true, half-false, about movements you despise and be successful, even drawing in the news media and other organizations interested mainly in eyeballs on their web ads.

You can be an online bully, going after people with relentlessness and fake courage because you don’t have to see them in person, shake their hand, and realize they are humans and not avatars. You can do all of this and do it well.

Is it the thing, the one thing, you want your children to say is your most significant contribution during the years you were given, as a stewardship, by God?

This is the conversation we have to have with ourselves almost daily as we fight the carnal tendencies to react and overreact. I certainly haven’t always gotten it right. I’ve made mistakes, said things, tweeted things, blogged things that I regret.

But lately it’s been this long view of life that has held me back. Because when I look at the list of spiritual gifts in the Bible, I see a lot of things, but I don’t see a ministry of potshots as one of them.