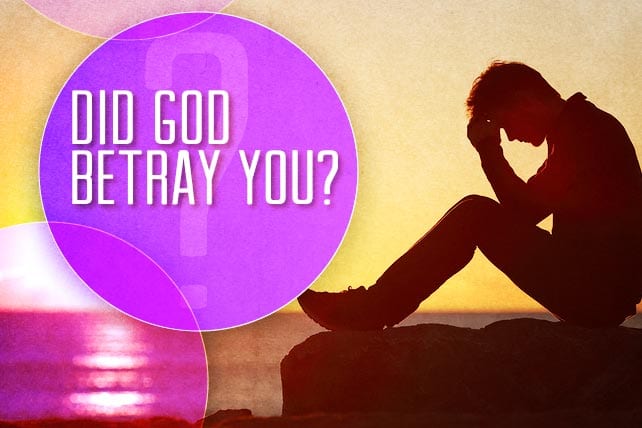 When I suffer, I become certain of two things: 1. God exists, and 2. he is a traitor.

I didn’t always believe that. I accumulated experiences with God. In every unpleasant moment, in every tragedy, in every moment of confusion, a light and deceptive hand turns my mind’s gaze Godward:

“He did this.”
“He should have stopped this.”
“He wants you to think you can be happy
… but he’s a mischief maker.
A traitor.”

If we can’t identify those arguments in our hearts, they’ll own our thoughts, emotions and actions. They will drive us as we process pain. Very easily, even subconsciously, we learn that God is a traitor.

I could be happy or I could be heartbroken.
I’m heartbroken.
God is in control.
God said he loved me.
One of these things cannot be true.
Therefore, I trust him a little less now.

Multiply that times a thousand losses, pains or failures, and we can easily descend into a betrayed and victimized theology: God is a traitor.

In the 2011 movie Warrior, an abusive and distant father reunites with his son, after the son fled with his mother 15 years earlier. The father, now a Christian, tries to show compassion to his son, who is in trouble. The son says to him, “You’re trying? Now? Where were you when it mattered? I needed this guy back when I was a kid. I don’t need you now. It’s too late now. Everything’s already happened.” It’s difficult to find more apt words for feelings toward God during intense suffering.

But those feelings paint an illusion. They’re misleading. God is not absent. God is not abusive. God is not hands-off, before, during or after our suffering. It’s almost impossible to believe, especially when we feel betrayed by him. But it is possible to believe that God is not an abusive father. And even if you can’t believe it, God does love you. And that’s not just a feeling that he has. God’s love governs the way he acts—the way he plans your life, the way he makes you feel, the way your world works. It all screams, “I love you.” Everything about the Christian’s relationship with God can be summed up in a single phrase: “I love you so much. And I’m not going anywhere.”

If there’s one adjective that accompanies God’s love more than anything in Scripture, it’s this: “steadfast” (1 Kings 8:23; Psalm 42.8″>42:8). He’s not inconsistent. He’s not unreliable. And he’s not removed. That is the most important thing to hear.