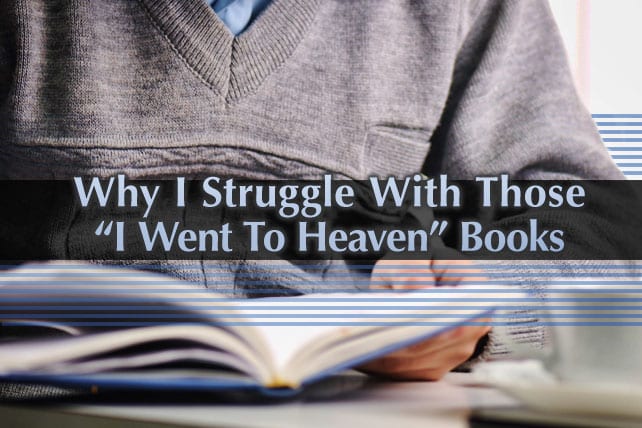 It’s a very interesting world we live in where anything usually related to Jesus no one is a really fan of today, yet the conception of heaven specifically is more popular than ever. It’s actually a booming business. There are multiple books all recounting someone’s visit to heaven or some form of the after life, and there have now even been a few movies made about those books. The industry, or genre, has raked in hundreds of millions of dollars, maybe even billions.

Now honestly, I’m not here to attack or discuss everyone’s personal anecdotes. In fact, I’m sure they most likely happened (because someone would have to have a pretty seared conscience to tell a bold lie, write a book on it, make millions and still hold fast to it). And you can’t argue with someone’s story. And personally, I get really upset at the ad hominem attacks most people lobby at other people on the Internet, especially when that thing or person has gotten very popular. So for me I always ask myself, “Would I tell or say this to the person if I was sitting at Starbucks with them having coffee?” and in this case the answer is yes. With all the heaven books, for me it’s less about the anecdotes and more about the culture and picture it’s creating.

My main point of contention with these books is we don’t realize how much they are impacting and affecting our culture’s view of heaven, and in my opinion one that is slightly off base and very different than the heaven depicted in scripture.

For starters, if you were to jump in the Delorean and go 88 miles per hour (shoutout to Marty and Doc!) all the way back to the first century and ask them what heaven is they’d probably have a much different definition than us. To us, heaven is usually seen as a place really far away. When we hear the word we picture clouds, harps and babies with wings (which in my opinion, if I ever saw a baby with wings I’d probably run, not say, “Oh my I’d love to be here for the rest of my life.”). To us it’s primarily a destination, and the final goal. A lot of us think, “OK great I’m saved, I just need to hold on tight until the world burns and then I get to heaven.”

But to a first century Jew, which was Jesus by the way, heaven was more a dimension than a physical place. It wasn’t seen as really far away, but actually right next to them, or behind the curtain as I like to say. It was the place where God was fully reigning and ruling and everything was happening how He wanted it to happen. And to the Jewish people, they actually believed there was one place on earth where heaven was—the temple. The temple to them was the place where heaven and earth collided. Where God’s space met our space. Where the two dimensions set up in the beginning (heaven and earth) were fully touching.