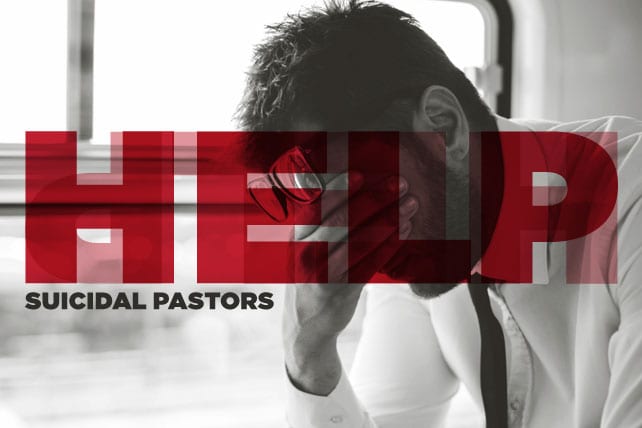 Last month two young pastors committed suicide, leaving their families, friends and churches wondering what they could have done or said to have prevented it.

Teddy Parker, a 42-year-old pastor and father of two, shot himself on November 8 in his driveway near Atlanta while his 800-member church and his family waited for him to show up to preach that Sunday. Parker suffered from manic depression.

Two weeks later, 35-year-old pastor Jim Kelley shot himself in West Tennessee. He was the father of two young daughters, and the husband of a pregnant wife. He texted a friend where to find the suicide note he left in his Bible.

A 2012 report by the Centers for Disease Control reveals that an average of 105 Americans commit suicide each day. An estimated 8.3 million adults report having suicidal thoughts each year.

If you are a pastor who is struggling with suicidal thoughts or ongoing depression, please consider these suggestions.

A recent study by LifeWay Research found nearly 1 in 4 pastors (23 percent) acknowledge they have personally struggled with a mental illness such as depression, and only half of those pastors said their illness had been diagnosed.

Self-diagnosis is a waste of time and energy. Ignore the Internet and get an appointment with somebody who has the credentials and experience to help you.

2. Let Others Minister to You

Pastors are often reticent to receive help because we have a role to play, expectations to live up to and people to please—including our celestial Supervisor.

I went through a season of clinical depression several years ago that was fortunately temporary and treatable thanks to my Savior, my medical doctor, a licensed therapist, and a supporting cast of family and friends. My journey for healing started when I allowed others to minister to this minister.