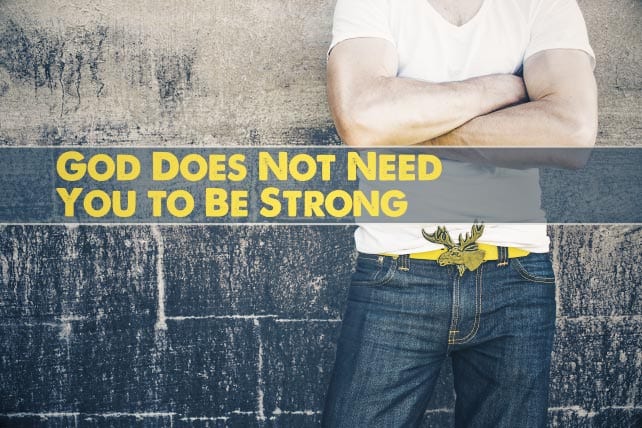 God does not want us to be strong. God wants to be our strength.

Now, if we were sinless, our wants and God’s wants would be in perfect harmony. We would only want to be strong in the strength that God supplies (1 Peter 4:11). But since we are not sinless, there is often dissonance between the strength we desire to have and the strength God desires to give us.

As a result, we can find ourselves deeply discouraged by the very limitations and adversity that God has actually designed to cultivate in us strong, courageous and liberating faith.

In Exodus 12, the people of Israel had been miraculously released from slavery and led out of Egypt by Moses. And by Exodus 14, Israel was encamped by the Red Sea, in a vulnerable and probably puzzling position. God had purposefully instructed Moses to lead Israel there because he had determined to humiliate Pharaoh and the Egyptians one last dramatic time—one more dramatic exclamation point to place on the declaration to Egypt and the world that would reverberate for the remainder of human history: “I am the Lord” (Exodus 14:4).

But the Israelites didn’t understand God’s purposes. There was probably plenty of murmuring about what in the world they were doing camped at what looked like a dead end. This only grew to fever-pitched panic when Pharaoh’s army showed up and pinned them all against the sea. It had all the look of a worst-case scenario: death by sword or death by drowning.

And like most of us would feel, the people were scared and angry. They yelled to Moses, “Is it because there are no graves in Egypt that you have taken us away to die in the wilderness? What have you done to us in bringing us out of Egypt?” (Exodus 14:11).

They were trapped in a weak place—a place designed for them by God.

Weakened to Learn Where Strength Really Is

Moses’ reply to the panicky people was, “Fear not, stand firm and see the salvation of the LORD, which he will work for you today. For the Egyptians whom you see today, you shall never see again. The LORD will fight for you, and you have only to be silent” (Exodus 14:13–14).

And fight for them he did. While holding off the Egyptian army with the pillar of fire, he opened for the Israelites a dry path through the Red Sea. Then he let the Egyptians loose and they chased Israel hell-bent into the sea, which swallowed them.

And on the other side of it all, Moses and the people erupted in a song we still sing today:

When the Egyptian army showed up, God could have made Israel a nation of Samsons. The Holy Spirit could have rushed upon them all, and they could have whipped Egypt with a bunch of donkey jaws. Why didn’t God do that?

Well, remember Samson? When God gave Samson power to overcome 1,000 Philistines on his own, what was the song Samson sung afterward?

“I struck down.” There is no hymn to God by Samson after any of his exploits, and he didn’t survive the one that likely got him mentioned as a model of faith in Hebrews 11:32. God was Samson’s strength, but Samson didn’t really recognize it.

God wanted Israel to understand that he was their strength and their salvation so that he would become their song. That’s why he put them in the weak, helpless place.

The Lord Is Our Strength

The exodus was the greatest Old Testament foreshadowing of the gospel of Jesus Christ. God delivers us all as helpless children, caught between the forces of evil and the sea of God’s wrath. Jesus is our deliverer, and his cross and resurrection our deliverance.

But the exodus, along with all the other biblical stories of redemption, is also a reminder that God purposefully designs our weak places and assigns us to them. When we feel ourselves trapped in them, we can be deeply discouraged, panicky and even angry. God’s purposes in such experiences are typically not clear to us at first. Things just look like he’s either made a huge mistake or he’s capricious. But he’s neither.

The truth is that as sinful people, we don’t really understand what it means for God to be our strength and our salvation until we are put in a weak enough place where he is our only option. At first this doesn’t feel like a great mercy, but later, sometimes much later, we discover it was a gift of measureless mercy. And then God really becomes our song.