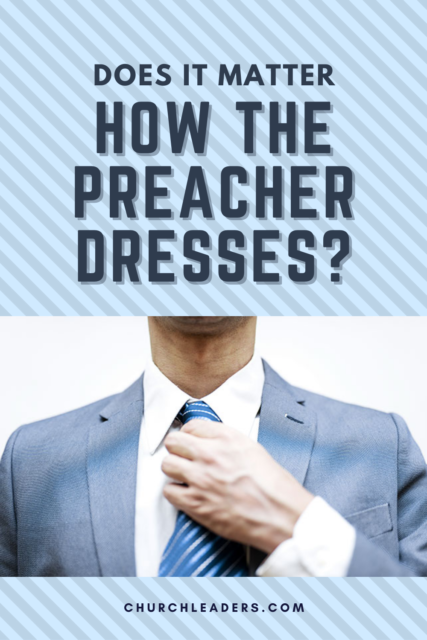 Now, if you want to incite a holy reaction against your hypocrisy and superficiality, say something about how the preacher is dressed. (You’re not even saying he should wear a coat and tie, but only that he should “dress up a little.” Watch the reaction to your simple suggestion.)

The comments will include:

This “tempest in a teacup,” I suggest, is ridiculous. We may as well be championing the outsiders’ lack of musical taste and installing heavy metal music lest we turn them off. Oh, wait, we’re already doing that.

At one point, the call for pastors to “dress down” was well-intentioned, I will grant.

Rick Warren (with his Hawaiian shirts—remember those?) is probably as much to blame as anyone.

Because I am white-headed and in my 70s, I have no right to speak about such a thing. Right?

There was a time—in the Jurassic past, I suppose—when the seniors among us were assumed to know a little and were given respect when they voiced their opinion. Those days are a distant memory. This generation automatically dismisses the point of view of anyone older than their parents.

My last pastorate was from 1990 to 2004. To show how completely things have changed in one decade, it was my practice to give up the necktie during August. One month of the year, I did not wear a necktie. At night.

Yep. I wore a tie on Sunday morning every Sunday. But for the evening services one month of the year, we shucked our ties.

These days, the tieless preacher is the norm. (In my itinerant ministry—what some might call “retirement”—host pastors usually send word ahead of time that no one wears ties. And frankly, I’m not unhappy about that. And that, I guarantee, is going to make some think I’m contradicting myself here!)

From the beginning, the casual look in the pulpit was a reaction against the emphasis on fashionable clothing, as people donned persona for Sunday church different from who we were during the week. As I say, the change was well-intentioned.

But that trend has run its course in my judgment. In fact, it has flat run in the ditch.

I see preachers entering the pulpit wearing t-shirts that stretch to cover their paunch. I wonder if they have any idea how ridiculous they look?

Anyone who knows the first thing about me is aware that I am completely committed to encouraging pastors. (That was one of three vows I made to God during a difficult time in my ministry over 25 years ago. I vowed to live simply, give generously and encourage God’s shepherds.)

Not long ago, a young pastor friend where I was preaching confided in me that he would be open to moving to another church if the Lord so led. That’s when I made a suggestion. “The way you dress in the pulpit fits right in with your congregation,” I told him. “But a pastor search committee is going to want a little more professionalism than what you are showing. If I were you, I’d dial it up a notch.” He took that counsel in the manner in which it was given, and has since thanked me for it.

I will admit that finding a young pastor who is open to a suggestion about these things is refreshing.

The time has come to reverse the trend.

I urge preachers to turn up the dial a notch, to dress a little better than the sloppy hitchhiking model they’ve been giving the Lord’s people.

Some say, “Teens are turned off by overdressed preachers.” My responses are several:

Honestly, most teens are not “turned off” by the preacher wearing a coat and tie. What they will think—and you may not be able to handle this—is that he is the adult in the room.

The problem, of course, is with the preachers.