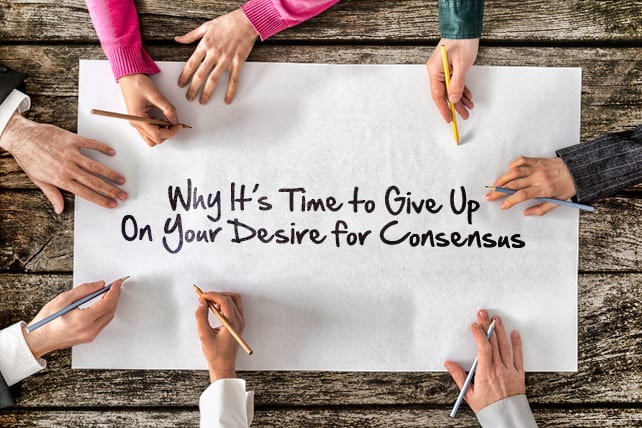 So you’d love to get everyone to buy into your idea, wouldn’t you?

Church leaders (and many other organizational leaders) are famous for trying to get consensus around an idea before launching it.

But consensus has a cost. A big cost. Here it is:

In fact, most great new ideas worth anything are divisive right out of the gate.

As a result, leaders shrink back. They smell the tension, and they back off. They try to get too much buy-in on the front end, and their vision doesn’t actually become better, it just becomes diluted.

As a result, too many leaders lose hope, passion and vision.

Why is that? How can you turn it around?

Think about how different history would be if great leaders always needed consensus from the people they led:

Moses would have left the Israelites in slavery.

Jesus would have listened to the disciples and talked himself out of the cross.

Peter would never have given up his kosher diet.

The apostle Paul would have gone back to Phariseeism.

Martin Luther would have waited for his bishop to approve.

Martin Luther King would have delayed until legislators were sympathetic.

Even Henry Ford, inventor of the assembly line and first mass producer of cars, famously said that if he’d asked people what they wanted, they would have said “faster horses.”

Any time you’re seeking to bring about radical change, most people will think it’s a terrible idea. And sometimes, they’re right.

But there are other times when they’re not.

You should live for the ‘once in a while’ idea. It’s the kind of idea that changes everything.

When it comes to courageous change, here are four things that are true: