Marriage in the Pandemic: Here’s How Couples Are Faring

We parked our car—the only vehicle in the gravel lot at the ruins of Sardis—and climbed out to view the extensive excavations. The legendary, wealthy King Croesus, who amassed gold from a nearby river, reigned from Sardis in the 500s BC. Ruins from an Artemis temple—originally dating from the fifth century BC and rebuilt by Alexander the Great 100 years later—still stand today. A stadium, shops and ruins of the largest ancient Jewish synagogue in the world were a short jaunt from the temple. At the time of John’s vision in Revelation, Sardis was one of the wealthiest Roman cities despite having been rebuilt multiple times after devastating earthquakes. The Jewish synagogue in Sart was in use for up to six hundred years. Many believe it serves as proof that Judaism remained strong even as Christianity was introduced in the region. Photo by Karrie Sparrow.

Jesus’ words in Revelation sliced through Sardis’ thriving “health” to the church’s spiritual realities. Although there were a faithful few, most people in the Sardis church were spiritually dead and dying. Christ summoned them to “wake up,” “remember” and “repent” (Rev. 3:2–3 NIV). Ruins from a small, fourth-century Byzantine church stand on the grounds of the Temple of Artemis. I found the crumbling church—built a few hundred years after John’s letter—to be a hopeful sign that some in Sardis took the warning to repent. 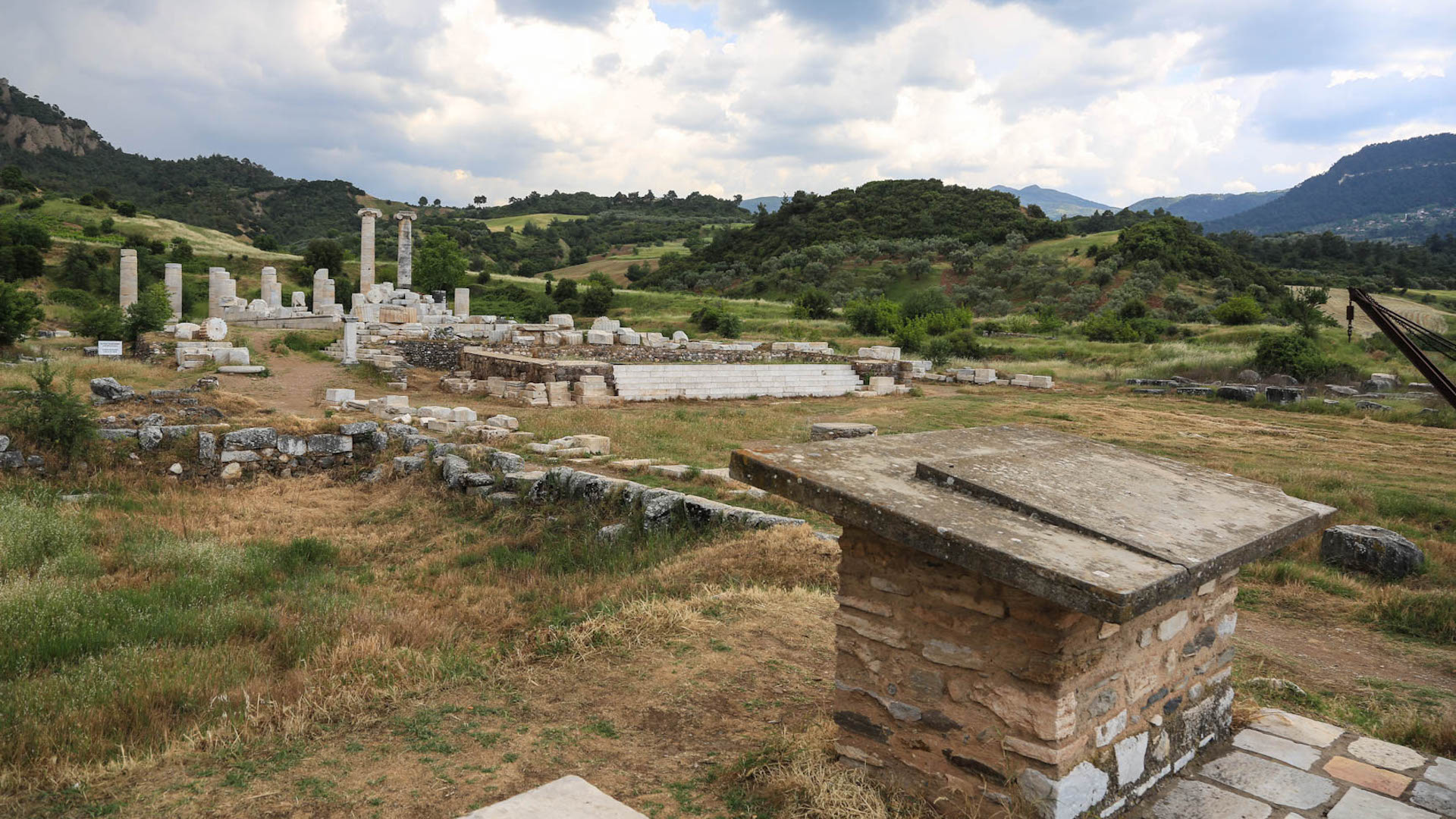 Construction and use of the Temple of Artemis in Sardis began during the time of Alexander the Great, near fourth century BC. The temple was still unfinished by the fourth century AD and was all but abandoned when Christianity entered Sardis. Photo by Karrie Sparrow.

The modern town of Sart—only a mile from the ruins—has just over 5,000 inhabitants. A nearby village, adjacent to the ruins, carries on with rural life. Children run in the dusty streets. Farmers drive tractors into the surrounding fields. There are no known Christians in Sart today. Modern-day Sart is a quiet town with nearly five thousand residents. There are no known believers. Photo by Karrie Sparrow.

Little remains from ancient Philadelphia. Not established until the mid-100s BC, the city of Philadelphia was the newest of churches Jesus addressed in Revelation. The modern city of Alasehir stands on top of Philadelphia. You have to look carefully to find any signs of the city’s former life. Crumbling Byzantine walls blend into its cityscape. One neighborhood has preserved the arches and sarcophagi from a sixth-century church. The call to prayer from the adjacent mosque interrupted our reverie as we perused the sparse ruins. This broken archway, now with a mosque in the background, is believed to have supported a church dome in ancient Philadelphia. Photo by Karrie Sparrow.

I felt uncomfortable with a spiritual weight in Alasehir. I tried to reconcile that feeling with the knowledge that this is where faithful believers were praised by Jesus, who said, “I know that you have little strength, yet you have kept my word and have not denied my name (Rev. 3:8 NIV).” Sarcophagi and other antiquities reside in a small city block in Alasehir, Turkey, the ancient city of Philadelphia. Photo by Karrie Sparrow.

Jesus also told the church in Philadelphia he would keep them from the hour of trial. Whatever that refers to, it did not mean they would be spared persecution. Accounts report that 11 Christians from Philadelphia were martyred alongside Polycarp in 156 AD. Philadelphia, the city of brotherly love, is now called Alasehir, which some believe to mean “city of Allah.” Photo by Karrie Sparrow.

Ongoing excavations of the city of Laodicea began only recently, in 2003. The work continues to uncover an expansive, wealthy city. Laodicea was built on a major highway and became a commercial and banking center. It was known for ear and eye medicine and for its black wool. The water was tepid and unpleasant, but nearby Hierapolis gushed hot thermal springs. Also nearby, Colossae was the home of pure, cold water. The church of Laodicea is still under excavation. Before the city was named Laodicea, it was called “Diopolis,” the “city of Zeus.” Photo by Karrie Sparrow.

The churches in Hierapolis, Colossae and Laodicea were relatively close and seemed to have a relationship with one other. Paul instructed that his letter to the Colossians be read also in Laodicea (Col. 4:16), and he was encouraged by their strong faith in Christ (Col. 2:5). Something seems to have changed, however, in the 30 years after Paul’s letter when John penned the book of Revelation. Wealth and independence had weakened their commitment to Christ. Little is known about what has been unearthed in ancient Laodicea because excavation efforts are relatively new. Archaeologists currently believe this area served as a marketplace. Photo by Karrie Sparrow.

In Revelation 3, Jesus used language and imagery familiar to them: riches, eye medicine, white clothing and tepid water. He said, “I know your deeds, that you are neither cold nor hot. I wish you were either one or the other! So, because you are lukewarm—neither hot nor cold—I am about to spit you out of my mouth. You say, ‘I am rich; I have acquired wealth and do not need a thing.’ But you do not realize that you are wretched, pitiful, poor, blind and naked” (Rev. 3:15–17 NIV). Laodicea was established along a busy trade route. This ancient path, known as Syria Street, connected Laodicea to Colossae. Photo by Karrie Sparrow.

Most citizens of Laodicea resettled into the modern-day city of Denizli after a devastating earthquake in 600 AD. It seems the ancient city fully died out after the Turks came through in the eleventh century. Today Denizli is a bustling city of over half a million. Out of that number, three or four former Muslims have stepped out to profess faith in Christ.

6 Reasons Why Physical Fitness Is Important for Pastors

Is God Proud of You?

The Goal of Spiritual Practices

In Our Discipling Relationships, Best-Sellers Are Great . . . But the Bible Is Best

True Confessions of a Pastor’s Kid