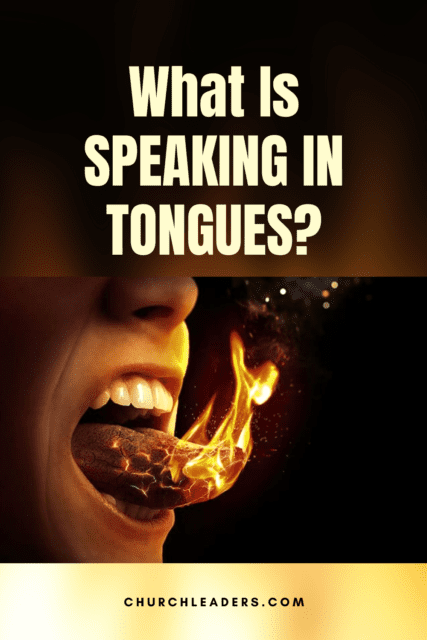 Theologian John Piper explains this type of speaking in tongues as a “kind of utterance where your heart is full to the point of overflowing with the Holy Spirit. He looses your tongue to utter those syllables and they are of spiritual value to you and if there is someone with an interpretation then they become spiritually valuable to others.” Piper also says if tongues are used “to just speak them out in public as a kind of corporate ecstasy, I don’t find warrant for that in the New Testament.”

First Corinthians 14:19 is an important statement by Paul regarding the use of tongues and how they should be used. He tells the Corinthian church, “But in the church I would rather speak five intelligible words to instruct others than ten thousand words in a tongue.” In other words, Paul is discouraging this type of misuse of the gift. If it sounds like gibberish in the presence of others (which no one would understand what is being said) without an interpreter it is not a proper biblical way to use the gift of tongues. If there is no interpreter present, one should refrain from using this type of speaking in tongues in a public worship gathering and instead use it only in private (1 Corinthians 14:27-28).

While pastor David Platt taught on 1 Corinthians 14, he said, “Speaking in tongues is also characterized by self-control. The New Testament does not give us room for frenzy, disorderly conduct. There is self-control that is a fruit of the Spirit, and it’s so controlled there in 1 Corinthians 14, you have one, sometimes two and at the most three people who would speak in tongues. The picture here is, even tongues at Pentecost, they stopped speaking in those languages when Peter started to preach the gospel. Speaking in tongues involves an interpreter, is characterized by self-control, and must edify the church and glorify God.”

A question many Christians have asked and one I have heard many times personally is “Do I have to be speak in tongues in order to be saved?” The clear and short answer to that question is no. Even Paul says in 1 Corinthians 12:30 that not everyone speaks in tongues, therefore from just that verse alone we can conclude that one does not have to have the gift of tongues to be saved or identify one as saved. Paul also seems to tell the church to speak in tongues less, not more, because of people’s misuse of them and tells them to focus on what’s more important.

So Let’s Recap About Speaking in Tongues

What is the reason for speaking in tongues? The Bible shows us it is for spreading the gospel in another’s native tongue, the edification of the church through prayer, and praise. As seen in Acts 2, it is for the spreading of the gospel, giving the Apostles the ability to speak in other people’s native language so they could understand what they were saying. We also see in 1 Corinthians 12, 13, and 14 where tongues are unintelligible languages of prayer and praise directed to God which are not understood by the speaker. These kinds of speaking in tongues need interpretation when done in the presence of others.

What happens when you speak in tongues? Speaking in tongues is a spiritual gift manifested by the Holy Spirit in a Christian’s life. Not everyone receives this spiritual gift. Speaking in tongues is never something uncontrolled, and it is to be done under the influence of the Holy Spirit. This gift enables one to speak a different language for the means of communicating the gospel to someone; for example, a missionary may speak a language he or she does not know to reach a remote tribe for the sake of the gospel. One also might speak words they don’t understand in order to give revelation from God through an interpreter.

What are the denominations that speak in tongues? Christian denominations that are known for practicing the gift of speaking in tongues are those that identify as Pentecostal Protestants, such as Assemblies of God, the United Pentecostal Church, the Pentecostal Holiness Church, the Church of God, and some Catholics. The Southern Baptist Convention’s International Mission Board (IMB) dropped their longstanding disqualification for missionaries that spoke in tongues in 2015 as they recognized tongues could be used still today to reach an unreached people with the gospel. Some Protestants believe that the gift of speaking in tongues have ceased, and they use 1 Corinthians 13:7 for their reasoning. Someone who believes this would be known as a ‘Cessationist.‘

It is a good reminder that spiritual gifts are given for the edification of the church and for the advancement of God’s kingdom, as we see in Acts 2. Therefore if any gift is used not to bring glory to God and his church, one should be cautious as to why they are using it.

Here are some resources to help you dig deeper for more understanding and clarity on the gift of speaking in tongues.

The Boundaries of the Gift of Tongues: With Implications for Cessationism and Continuationism

John Piper: What Is Speaking in Tongues?

David Platt: Are Tongues a Gift for Today?

Paul Washer: Is [Tongues] for Today?

Matt Chandler: Prophecy, Tongues, Their Continuation, and Our Fears

Albert Mohler: Do Miraculous Spiritual Gift Continue or Have They Ceased