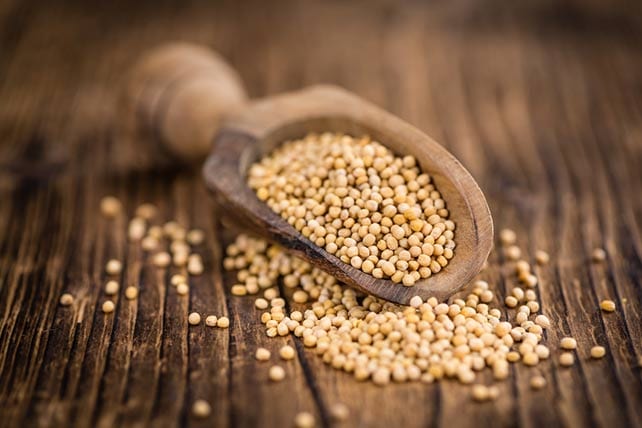 Jesus’ story of the mustard seed and faith might mean something different than we’ve often thought.  I’m preaching this sermon tomorrow, from the Gospel of Luke, chapter 17:5-10.

A Little Faith and A Lot of Obedience

5The apostles said to the Lord, “Increase our faith!”

6He replied, “If you have faith as small as a mustard seed, you can say to this mulberry tree, ‘Be uprooted and planted in the sea,’ and it will obey you.

7“Suppose one of you had a servant plowing or looking after the sheep. Would he say to the servant when he comes in from the field, ‘Come along now and sit down to eat’? 8Would he not rather say, ‘Prepare my supper, get yourself ready and wait on me while I eat and drink; after that you may eat and drink’? 9Would he thank the servant because he did what he was told to do? 10So you also, when you have done everything you were told to do, should say, ‘We are unworthy servants; we have only done our duty.’ ”  -Luke 17:5-10 NIV

Two Warnings And a Plea for More Faith

As we gather at the Lord’s Table today, we encounter this passage from the Gospel of Luke.  It’s a familiar story, but usually we read the story from Matthew’s Gospel because Matthew has Jesus saying that if you have faith even as small as a mustard seed, you can command a mountain to be thrown into the sea.

Here in Luke’s Gospel, however, Jesus uses a slightly different image.  He has just given the disciples two warnings about the life of faith.  In the first warning Jesus says, “Sin comes into people’s lives, but don’t be the person who causes others to sin, especially children.”

Then, Jesus spins his teaching in the opposite direction by saying, “And if someone sins, rebuke him, and if he repents forgive him.”  Now that sounds logical enough, but then Jesus adds, “And if he sins against you seven times in one day, and repents, then you are to forgive him all seven times.”

In other words, don’t cause people to sin, especially children.  And, don’t prevent others from turning from sin by refusing to forgive them.  Even if they sin against you seven times in one day, you’re to forgive them all seven times!

At those words, the disciples seem to throw up their hands in resignation, because Jesus has just laid out two scenarios that outline our responsibility for the spiritual and ethical lives of others.  We are  not to lead them into sin, especially those who are the least mature and most vulnerable.  And, we are to forgive those immediately and repeatedly who struggle to break free from the grip of sin.  That’s a lot of responsibility, and it ran counter to the idea that righteous people have no responsibility for others.

Remember the story Jesus tells about the righteous man and the publican.  The righteous man lifts up his eyes to heaven and tells God, “I’m glad you didn’t make me like him!”  Obviously, he felt no responsibility for the humble publican beside him who lowered his eyes and prayed, “God have mercy on me a sinner.”

But back to our disciples.  They seem both desperate and exasperated, and they respond to Jesus’ teaching by saying, “Okay, Lord, if that’s what you want us to do, increase our faith!”  Literally, they were saying, “Add to our faith.”  In other words, “We need some help here!”

Jesus’ Impossible Reply To The Disciples

Now we get to the part we think we know very well.  Jesus replies by saying,

“If you have faith as small as a mustard seed, you can say to this mulberry tree, ‘Be uprooted and planted in the sea,’ and it will obey you.”

Matthew’s Gospel records Jesus’ reply in a similar fashion, but instead of uprooting a tree, Matthew records Jesus saying you can move mountains!

It was believed that prophets would “uproot mountains” which is exactly the image Jesus uses in Matthew’s account.  But the idea of uprooting is also present in Luke’s account.  But a little faith uproots a mulberry tree instead of a mountain.  Both, however, get cast into the sea.  This is not a small feat by any means, and a little faith is the key to it.

It appears that Jesus is setting up an impossible goal for the disciples.  None of them have even “mustard seed” faith apparently because there is no record of trees, much less mountains, being flung into the sea by the disciples, or anyone else for that matter.

Here’s the way we usually handle this passage.  We act like Jesus is saying something that is achievable, but of course, he doesn’t mean it literally, we say.  Rather, Jesus means that even a little faith can move mountains — obstacles that might be in our way.  “Mountain-moving faith” we call it, or “mustard seed” faith.  Remember when you could buy necklaces and bracelets that had a single mustard seed incased in a ball of plastic that magnified its size?  A little faith accomplishes big things!

But suppose that’s not what Jesus means here. Because it never happens.  The disciples never exhibit that kind of faith, as though faith were a superpower like super heroes possess.

Why do I say that?  Well, suppose Jesus is saying, “You want faith.  Let me tell you how powerful faith is.  Just a mustard seed amount of faith can uproot trees (or mountains).”

But Jesus hasn’t asked them to uproot trees or mountains, or even to accomplish the impossible.  He’s just told them not to cause other people to sin, and when others do sin, to forgive them.  That is not mountain-moving by any means, or even tree-uprooting for that matter.

We Have Enough Faith To Be Faithful

I really think that what Jesus is telling the disciples is this — “You have enough faith to be faithful.” In other words, he is saying, “You don’t even need a mustard seed size faith.  The little bit of faith you have is enough for you to do what I’ve called you to do.”

Why do I think that?  Because of what Jesus says after the mustard seed story.  He gives an example of a servant, a story that seems to have nothing to do with faith, or with the question the disciples just asked.

Jesus says, “Suppose one of you had a servant plowing or looking after the sheep. Would he say to the servant when he comes in from the field, ‘Come along now and sit down to eat’? 8Would he not rather say, ‘Prepare my supper, get yourself ready and wait on me while I eat and drink; after that you may eat and drink’? 9Would he thank the servant because he did what he was told to do? 10So you also, when you have done everything you were told to do, should say, ‘We are unworthy servants; we have only done our duty.’

So, Jesus turns from an example of faith to an example of faithfulness to illustrate his point.  Probably Jesus and the disciples are outdoors, walking along.  Jesus has already pointed to a mustard plant, and a mulberry tree.  Now he points to a servant plowing a field, and another looking after sheep.  Both were very common practices in that day, and visual examples were easy to spot.

Then Jesus weaves a little story around the servants.  “Suppose your servant comes in from the field.  You as the master don’t say to him, ‘You look really tired.  Come, sit down and eat, and take it easy!’

“No, the logical thing is that when the servant comes in, before he can eat, he has to prepare the meal for his master.  Only after he finishes all his chores, can he then eat.  And, at the end of the day, he doesn’t get special praise because he’s just doing what a servant does.”

Then Jesus brings the point home –

“So you also, when you have done everything you were told to do, should say, ‘We are unworthy servants; we have only done our duty.’ “

We’ve just done our duty, we haven’t done anything extra.  We’re God’s servants.  God has given us all the faith we need to serve him, to live our lives as we should.  And that’s all we have to do — do our duty.  Be faithful, live like we’re supposed to.  And none of that takes a supernatural amount of faith, only a little faithfulness.

I read somewhere that when men help around the house, they expect some kind of recognition.  So, when we’re finished vacuuming, or folding the clothes, or with some other chore, we men want our wives to see what we’ve done and give us some reward.

“Honey, did you see how great the carpet looks after I vacuumed it?”  Or, “Just look at those windows, I did a great job cleaning them, don’t you think?”

Women, I am told, just go about their business doing stuff for which they do not expect, or receive, recognition.  That’s what Jesus is saying here.  Even if you’ve done a great job of serving God, of not leading others to sin, of forgiving others when they do, you’ve only done what you were supposed to.

The Good News About Faith

So, the good news about faith is, we’ve already got enough.  We have enough faith to be faithful.  And so as we gather at this table today, we gather encouraged that we don’t have to demonstrate mountain-moving faith, or even tree-throwing faith!  We don’t have to be a spiritual superhero to serve God.  We have all the faith we need to be faithful.

It is interesting that at this table, Jesus has done it all.  In the account we will read in a few moments, Jesus has all the action verbs.

Jesus takes the bread.  Jesus blesses it.  Jesus breaks it.  Jesus gives it to us.  And with the cup it’s the same.  Jesus does it all.  He gives us his broken body, his shed blood.  He does what we could not do for ourselves.  He both becomes and offers the sacrifice we need.

He gives us all we need, including faith, to be faithful to him.  As we come to this table today, let’s examine our own hearts, because even if we have done everything we were supposed to do, we are still just doing what servants do.