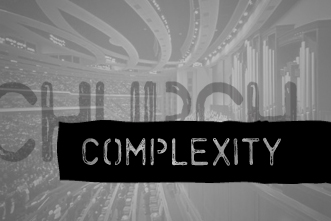 Unnecessary complexity lives to some degree in every church. Effective leaders know how to identify it and deal with it because complexity always drains energy, attention, and other resources from the mission of Jesus. Be aware of these three kinds of complexity:

#1 Decision-making Complexity. The first kind of complexity is the classic “How many people does it take to change a light bulb?” Every decision in your church has a “people count.” The people count is how many folks are given permission to speak into a decision. And every decision in your church has a “decision weight.” The decision weight is a measure of the decision’s importance. Is the decision a small, medium, or large decision? Are we buying copy paper, selecting the color of the carpet, or purchasing property? Using these two variables, you can discern the complexity of decision-making. How many people are involved at what level of decision-making? The higher your “people-count-to-decision-weight” ratio, the more dramatic the complexity you let in.

#2 Doctrinal Complexity. Every ministry has a theological conviction. The question is what defines the core? Do you have a simple “pail of orthodoxy,” or do you wheel around a heavy metal toolbox with dozens of “critical issue” compartments? Remember, when Pharisees tried to stump Jesus, they steered Him into the complexity of 613 laws of the Torah (as traditionally numbered). They literally tried to set verbal traps for Him by asking Him which commandment is the greatest. But He evaded their sting with stunning clarity- the entire Law and Prophets hang on two love commands (Matt 22:37-40).

#3 Programmatic Complexity. Although many churches are waking up to the problem of the program paradigm, this kind of complexity inhibits the mission and vision of our best churches. Churches in North America are over-programmed and under-discipled. We raise up program managers instead of disciple makers. We think that more programs attract more people, when in fact, fewer, more meaningful initiatives engage people. Engaged people, then, attract people, inviting others to know Christ and to follow Him together. One simple diagnostic question is, “If I stood in your primary ministry environment (usually worship), how many “doors” of possible next steps or programmatic ministry options would be presented before me?” If you have three or more doors, you probably have too many. It’s not uncommon for churches to have 8-13 “doors.”

What should the leader do about complexity?

The answer is found in the axiom, do more by doing less. If you don’t see complexity as the addition of the unnecessary, then you will never receive the less is more principle in your leadership heart. There are three logical ways to do less: reduction, combination, and elimination.

Reduction. Many times, the first step is looking for ways to do less of some dynamic that created complexity. For example, you reduce the number of people involved in a decision, or you might reduce the word count in your statement of beliefs as a church. Even in an over-programmed environment, you can simplify without eliminating a program just by reducing the number of programs advertised in the Sunday worship guide.

Combination.  Combining things is an often-overlooked strategy for battling complexity. Sometimes two teams, two belief statements, two programs, or two initiatives are not so different. Two can and should become one. With a little more work and conversation, the synergy of a good combination will be well worth it. One church took a separate Wednesday night men’s ministry event and combined it with the primary strategy of Adult Bible Fellowships. At Auxano, we wanted to launch both a coaching network (called co::Labs) and a Church Unique Certification process at the same time. After developing them separately, we decided to scrap the certification model and use the co::Labs as the primary step of certification.

Elimination: The most obvious step to remove complexity is to just flat out cut stuff. Gardeners know to prune the branches for maximum health and growth. My mentor, Howard Hendricks, used to say, “The secret to concentration is elimination.” Jim Collins recommends a “stop doing list.” Right now, you could probably be more effective by eliminating 20% of what you are doing as a church. What would that 20% look like for you? Don’t be afraid to stop doing things, but make sure you have the right conversations and look for ways to reduce and combine first.