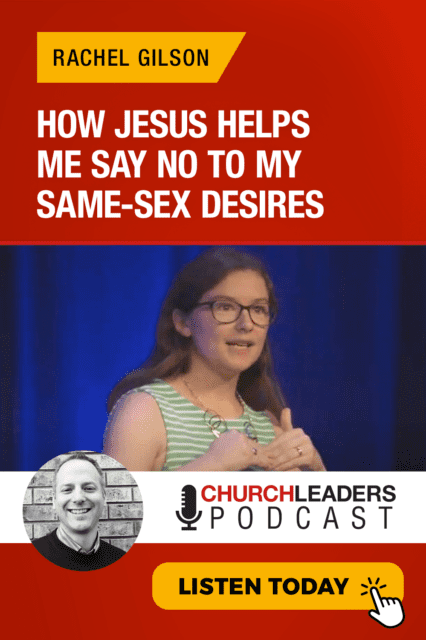 “Early on, it was clear to me that the Bible said, ‘no,’ to same-sex lust and sexual relationships. And I’ve since learned Greek and Hebrew, and it turns out, it still says, ‘no.’ But early on, I struggled with, why does God say no to this?”

“If you’re only willing to obey when you agree and understand, maybe the God you’re interested in serving is yourself.”

“I think the number one thing that helped me [resist acting on my same-sex desires]…was that I had a community of people who loved me and loved Jesus.”

“When we’re talking about the gay people in our lives or the trans people in our lives who do not follow Christ, occasionally there’s this panic or there’s this fear, like if I don’t make it clear what God thinks about X, Y, Z, then I’ve not yet permission to share the gospel with them…I’m not really sure where this comes from. It’s not typically how we share the gospel with anybody else.”

“Unfortunately, many Christians and many churches historically and even today have treated LGBT people with, let’s just call it contempt.”

“Obviously, there are going to be gay people in your life who are wary of Christians, and do they have a right to be wary.”

“[Jesus’] words about what’s good news for our bodies don’t make a lot of sense if you don’t understand who he is.”

“I’ve just found in general, the church has been super eager to bring up positions and super reticent to actually love people in their lives, And I’m not sure that’s what we see when we observe Christ in the gospels.”

“You need to listen to actually your disciple and the figure out, what does he need? And he doesn’t need for you to bring [his sexuality] up in every single conversation, but he also doesn’t need you to never bring it up.”

“One of the things [church leaders] need to do is actually talk about [the LGBTQ conversation]. There are still too many churches that just aren’t talking about it. But it’s really hard to talk about it alone if you have a terrible record of actually holding your congregation to account on things like pornography. One of the worst things you can do is hold LGBT people or same-sex attracted people to an incredibly high biblical sexual standard and hold everyone else in your congregation to a really low sexual standard.”

“The reality is, straight sex can’t make you straight, and forcing people into marriage because you think it’ll ‘fix’ them devastates a lot more than just that person. It devastates whole communities. So I want to be really cautious that, marriage is possible, but it is not required.”

“I don’t have to be attracted to all men to be faithfully married to one man. If God calls me to marriage, he will give me exactly what I need.”

“The question isn’t, should I feel really, really guilty about having desires at all? The question is more, how can I be faithful in the midst of any set of desires?”

“Sometimes [mixed-orientation] marriages get portrayed as though they are wild. But as I talk to my other married friends, they’re actually pretty similar…All kinds of marriages can have challenges around sexuality.”

“Sometimes people are using LGBTQ language because of the past that they have. It can be useful for some people. And people in that camp are often living a very costly experience.”

“I’m a missionary full-time, and missionaries learn how to use language. We don’t just care about what I mean, we care about, how is the person receiving what I’m saying? That’s a basic missionary task.”

“Church leaders, I just want to give you permission to love. Jesus spent a lot of time with sinners, and he got called names for it, but he didn’t stop loving.”

Mentioned in the Show by Rachel Gilson

Born Again This Way: Coming Out, Coming to Faith, and What Comes Next by Rachel Gilson
Mere Christianity by C.S. Lewis