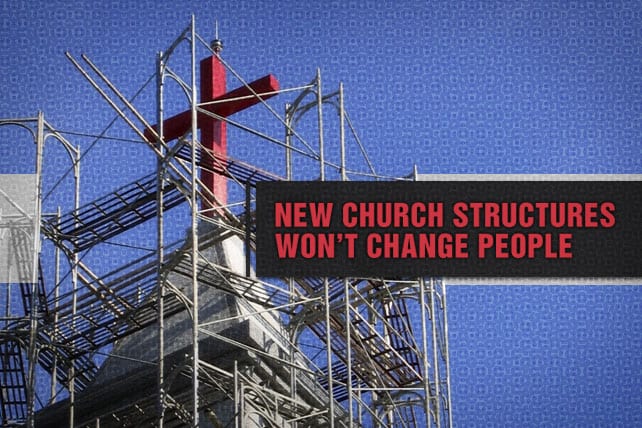 In the last post, I discussed Jesus’ comments about putting new wine into new wineskins. Here, I want to continue this conversation because the issues concerning the way of life in a church (wine) and the structures of the church (wineskin) are much more complex than they might appear or than we like them to be.

I’ve found that most of us prefer a plan, a method that has proven effective elsewhere, and if we learn how to make that method (the wineskin) work then we will get similar results. For instance, we might read a book like Reggie McNeal’s Missional Communities and survey the various new ways that churches are grouping in order to promote creative forms of community and mission. We pick the one we like the best and then try to copy their methods.

We can learn much from experiments and creative structures that have been developed in other churches. In fact, one of the best ways to help people catch a vision for a different way of being the church is to observe it elsewhere. However, there are a few things that we commonly overlook.

In the early 1990s I was a part of a new wineskin, an organic/missional experimental church in Houston. Of course we did not call it organic or missional, but that’s what we were. We did not fit the normal patterns of church life as we tested new ways of forming and living in community. We did not have traditional expectations of church life and if you spent any time with us this was very clear.

We saw many people embark upon a new relationship with Jesus, and we had a very strong leadership core. Those who came to Jesus for the first time through the relationships in our church joined right into our life quite well. To them the structures of our life as a church was all that they knew. I remember one person returning from vacation and sharing her shock at the how the traditional church she visited operated.

In addition to new Christians, we also had many join us who had been a part of traditional churches. Those of us from this category did not flourish in this new wineskin experience quite as easily. It was not hard for us to commit to the vision. Many who joined were fed up with traditional church forms and some had been hurt by church life or were simply burned out. Our vision for this new way of being the church was compelling and, for most, easy to commit to.

However, there was a problem. We had been shaped and formed by the practices of previous churches. We didn’t suddenly leave behind these patterns when we moved into this new experimental church. That “old wine,” if you will, came with us. And that included things like expectations, patterns of leadership and participation habits that were woven into the way that we did church. It’s impossible to leave such things behind simply because we choose to do something else.

The practices of our former church life had formed us and because of this formation the old wine was poured into a new wineskin. Let me illustrate: Some tried to get the church leadership to perform traditional roles, even though they were told up front that the leadership would not do those things. Others would ask where we did Bible study, and the leaders would lay out all of the places where the Bible is woven into the life of the church, but because we did not have a specific ministry called “Bible study” they could not get it.

This is not unique to church life. For instance, if someone has been a successful section manager in a department store and then takes a new job managing a small retail store, the old “wine” of the former job doesn’t disappear. Some of the work patterns might transfer well, but many will not. For instance, in a large department store, the manager of a specific department has a very limited role that focuses on one section of the store and has the support of various other management divisions that make the whole store work. Whereas in a small boutique, the manager has to take care of almost everything. One cannot simply choose to change and expect to flourish in the new role. And providing some kind of up-front training will only set the right course. The new employee must do the hard work to embrace and be shaped by the patterns of work that fit the vision and strategy of the new employer.

The employee won’t necessarily change simply because he is in a new store. He could have been very successful in his former role, but when you put him in a new role (a new structure) he naturally will continue operating according to old patterns because those patterns proved effective in the past. And when stress rises, he will even more ardently depend upon those old patterns. When stress comes, the first thing we do is to return to what we already know how to do, even if we logically know that it won’t work.

Many Christians today are frustrated with the church. They know they want something else. And the natural response is to look at a different structure of church life. And who is to blame them when there are so many church structure prophets promising entry into the ecclesial promised land with the adoption of their strategy. While these prophets might very well have experienced something akin to ecclesial bliss, others adopt their methods and find themselves wandering around in the land of banality.

And after a couple years, they go looking for another strategy.

In many ways, this is exactly what the disciples faced while following Jesus. They followed him because he gave them a vision for the kingdom of God. However, they brought with them a definition of what the kingdom of God should look like. For instance, Simon the Zealot—like all Jewish Zealots of the time—would have assumed that the kingdom of God would come when the Israelites rose up and violently drove out the Romans. Matthew the tax collector—whose vocation required him to collaborate and compromise with the Roman authorities—would have had a more realistic vision of trying to work with the power players in the Roman government. As the Gospels clearly illustrate repeatedly, none of the disciples assumed that the cross was going to be part of the vision of the kingdom. Self-sacrificial love did not play a part in the common Jewish vision for God’s Messiah.

Putting the 12 disciples in a new structure did not change their understanding of how God’s kingdom work. They brought with them patterns of following God. Even though Jesus gave them a new structure (the small group of discipleship) for three years, all except John walked away from it when Jesus went to the cross. Afterward, the fishermen in the group of disciples returned to their old life patterns—they went fishing—when they did not know what else to do. The natural tendency within us all is to return to our former conform zone—old life structures—when God is trying to form new wine within us. But to deal with that topic requires another post altogether.

About 10 years ago, a staff member of a large church in Florida shared how her senior pastor had read the book Missional Church written by a team led by Darrell Guder. He passed out the book to his staff and church counsel and told them, “This is our vision. This is what we shape all of our ministries by from this point on.” Of course this did not work. Sadly, I’ve heard this story repeated with quite a number of different books on church vision and strategy. As with the staff member from Florida shared, almost always, this fixation on structures and strategies never deals with the real issues that actually give life to those structures and strategies.

New forms of church life are not alive because of the new forms. “New wineskins” don’t transform “old wine” into “new.” Most of the time it just creates “whiners” who don’t understand why things have changed. They are stuck in the old wine, the old ways that don’t line up with the new vision. It takes new wine, and in the case of this parable, this is about the living presence of Jesus in our midst. We are reminded of this when we participate in communion. We drink the blood of Christ as a physical reminder that the blood of Christ is within us. He took on our death so that we might enter into his life. He shed his blood for us so that the life symbolized by that blood can flow through us.

Let us receive this new life.