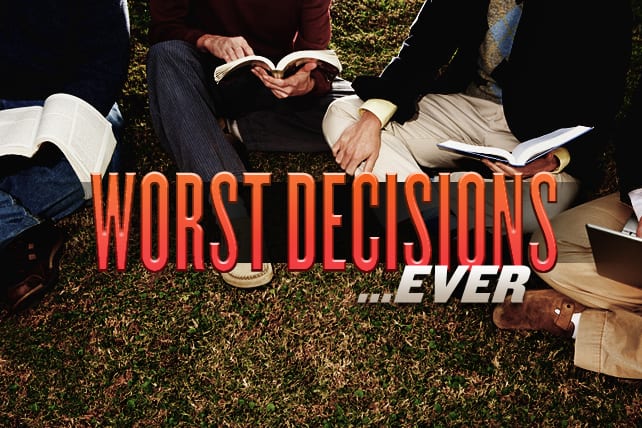 When the decision affects us and (rarely) only us, it’s frustrating.

But when the decision affects the lives of others…well that can be more than frustrating.

1. Adding new members to existing groups instead of starting new groups. It seems like the right thing to do, doesn’t it? After all, don’t you have a commitment to help small group leaders succeed? Why shouldn’t you provide a steady stream of new members to existing groups? There are at least two very good reasons. First, prioritizing launching new groups is a key to building a thriving small group ministry. Second, it is actually counterproductive to add new members to existing groups. Once a group has been meeting longer than about three months it becomes increasingly more difficult for a new member to break through the nearly impermeable membrane that forms. Only the most brazen extroverts, experienced party crashers and friends of current members succeed. Everyone else finds breaking into the clique too difficult. See also, Top 5 Ways to Start New Groups. Lots of New Groups and Critical Decision: Add Members to Existing Groups vs Starting New Groups.

2. Allowing the senior pastor to delegate the role of small group champion. It may seem logical to delegate the role of small group champion to the small group pastor. After all, why have a small group pastor if not to be the champion? This simple mistake may seem logical, but when this is allowed to happen you announce to everyone that being involved in a small group is an add-on activity. You also fail to take advantage of the most influential voice in the church. See also, Rethinking the Role of the Small Group Pastor and Your Senior Pastor as Small Group Champion Leads to a Church of Groups.

4. Expecting the small group pastor to take care of too many small group leaders. This is a very common mistake and reflects a lack of understanding of span of care. Caring for too many can only do two things: burn out the caregiver or provide inadequate and watered down care. See also, Span of Care and How to Build an Effective Coaching Structure.

5. Starting new groups without providing a coach. While building an effective coaching structure is definitely a challenging part of building a thriving small group ministry, providing someone with experience to walk alongside every new leader is an important key to sustaining the new groups you launch. Failing to provide a coach to guide every new leader is a simple mistake that sinks many small group ministries. You can start as many new groups as you’d like, but if you can’t sustain a high percentage of what you start, your ministry will not grow. See also, 5 Steps to Sustaining the New Groups You Launch.

6. Calling everything a group. In order to invite unconnected people to something more than an opportunity to develop friendships, what you invite them to must be something that provides the essential ingredients of life-change. Unless everything you call a small group provides the essential ingredients of life-change, you will often send unconnected people in the wrong direction, connecting them to programs that detour them from where they need to go. See also, Groups of All Kinds and the Essential Ingredients of Life-Change.

7. Only choosing new leaders from among the usual suspects. This is a terrible ministry decision at the very heart of many, many stuck small group ministries. The fact is, the best potential leaders in many churches are not yet in a group and are unknown by the staff and key leadership recruiting new leaders. The genius of both the small group connection strategy and the HOST strategy within a church-wide campaign is that these strategies help identify leaders from outside the usual suspects. See also, How to Launch New Groups Using a Small Group Connection and  7 Things You Should Know About the HOST Strategy.

8. Not saying “no” to unfit “leaders.” Although unfit can cover a lot of ground, the version that catches many rookie small group pastors are the people who want to be a leader but couldn’t build their own group if their life depended on it. They need to be given 10 members and then don’t have what’s necessary to hold the group together. Learning to say “no” often begins with learning to ask, “Do you already have a few people you can invite?” Seasoned small group pastors learn to be wary of the “leaders” who can’t build their own group.

9. Promoting small groups on an annual basis. If the annual emphasis for small group ministry (alongside the annual emphasis for volunteering, student ministry, children’s ministry, foreign missions, local outreach, etc.) is the only time you talk about or promote the importance of being connected to a group, you will never build a thriving small group ministry. In fact, one of the most important reasons explaining Saddleback and North Point’s success at connecting such high percentages of their adult attendance to groups is that they never stop talking about small groups. See also, Top 10 Reasons Saddleback Has Connected Over 130 Percent in Small Groups.

10. Relying on apprenticing and “birthing” new groups out of old groups as the primary way to grow the number of groups. It turns out that while apprenticing is a powerful leadership development practice, it is only occasionally a dependable method of multiplying groups. See also, Small Group Ministry Myth #1.

What do you think? Have one to add? Want to argue? You can click here to jump into the conversation.