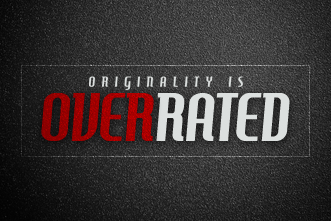 There’s an overwhelming obsession with originality going on today.

Everybody wants to be an original. Or do something original.

This is especially true when it comes to any creative endeavor.

Pretty much anything that requires even a hint of creativity.

Basically the line of thinking says that if something isn’t completely original, it isn’t a bit creative. Which translates into the idea that you have to do things no one has done before and say things no one has said before.

I’m not buying it. In fact, I’m increasingly finding the opposite to be true:

True creativity is fresh but not always original.

Let me come at it this way. A truly creative sermon isn’t where you say things no one has ever said before. (In fact, if you’re saying things that no one in 2,000 years of Christendom has thought of, you shouldn’t be proud. You should be a little worried.)

A creative sermon is one that takes a truth that has been heard 100 times and makes you feel like you’re hearing it for the first time.

It’s not original to you. But it’s made fresh by you.

They’re movies that provide fresh takes on themes that are in any great movie: conflict, loss, overcoming adversity, etc.

Perhaps the greatest enemy of creativity is the quest for originality.

There’s only one person who has ever created ex nihilo. We’re not Him.

Our creativity lies in making the original creation fresh.

Originality is overrated. Fresh is where it’s at.