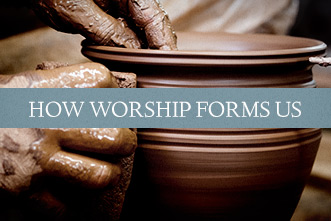 When we reduce discussions about worship forms to simply matters of style, we miss a crucial aspect of corporate worship: Worship forms us.

You see, it’s not simply a matter of preference, of how one generation likes the “good ole hymns” and another generation likes rock n’ roll. It’s a question of what forms us as the people of God.

But … you may be wondering: Does worship really do that?

Perhaps you think, as one prominent megachurch pastor/author/speaker suggests, that so long as we go “deep” in the message/sermon, we can go “wide” with our musical choices and decisions about the lobby and parking lots. Or, like his colleague (another wildly influential pastor/author/speaker) has said, we can do “anything short of sin” to get people to know God.

Who cares what we draw them with so long as we preach the Gospel once they get there, right?

James K.A. Smith, a philosopher at Calvin College, might say we’re missing a crucial part of the conversation. In a recent interview with Christianity Today, Smith argues that we are more than the beliefs we confess; we are the way we “navigate the world” .. .and we learn that way in corporate worship (i.e. church services).

” … I engage social theorist Pierre Bourdieu. He had an expansive notion of belief. He thinks your body believes things that your mouth could never articulate. The orthodox Christian tradition was launched with the Incarnation of God in Christ, the apostolic witness and the Scriptures. But we inherit that rule of faith in two ways: First, in the creeds and confessions of the church (the articulated, explicit aspects of the faith), and second, in the liturgical heritage that hands down the know-how of the faith—our practices, our disciplines, our liturgical forms. Ideally, there’s a feedback loop between those two things. If you had just the creeds and confessions without the practices of Christian worship, you would never get the full inheritance of what the Spirit has passed on to us. That inheritance is not owned by Constantinople or Rome or Canterbury. Rather, it is a common universal heritage of the body of Christ that can be renewed for any who call themselves Christians.”

Smith argues that human beings are “at their core defined by what they worship rather than primarily by what they think, know or believe.” Here is he advancing the “central Augustinian claim that we are what we love.” As Smith engages the French philosophers Merleau-Ponty and Bordieu, he proposes that “we are ritual, liturgical creatures whose loves are shaped and aimed by the fundamentally forming practices that we are immersed in.”

Our worship practices—what we do when we gather—matter. I argued this in my simplified-for-the-layperson book, Discover the Mystery of Faith, based on the church’s historic mantra: Lex orandi, lex credendi (the way we worship becomes the way we believe). But Smith gives this claim its philosophical and anthropological teeth.

And yes: We do need to translate. We can’t be rigid and inflexible or selfish. We need to allow each generation the space to say these things and do these things in fresh ways for new contexts. (See previous blog.)

These conversations can be healthy and will serve the church well so long as we remember one crucial thing about the worship service: It is not primarily about mission (reaching people) or expression (preference); it is about formation.

Hear Smith’s words on this:

“My burden is that a lot of North American Christianity has reduced worship to expressive practice, where the most important thing is that we are sincere in our expression. We think of worship as primarily upward expressions of us to God. Whereas, if you recapture the formative, God-oriented action in worship, in funerals, in baptisms and in the Lord’s Supper, there is something at stake in making sure that the shape of the ritual tells God’s story, so it gets planted in us.”

[NOTE: I am currenly reading Smith’s Desiring the Kingdom. It is definitely an academic book, though Part Two is aimed at the practitioner—pastors and worship leaders. Chapter 5—in Part Two of the book—is pure gold as Smith details what each element of the historic liturgy does for our formation as the people of God.]