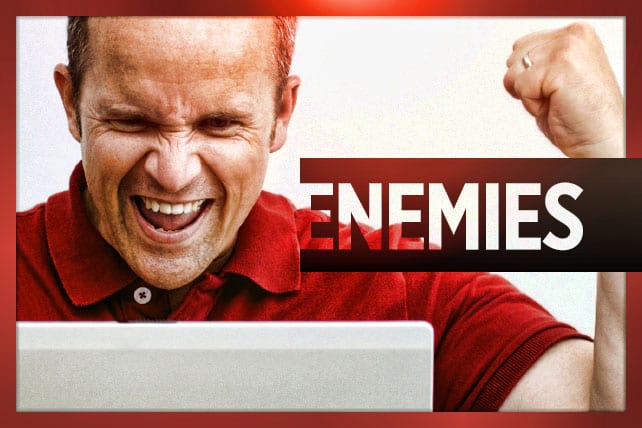 Before Christmas we looked at the tragic end of Israel’s first king, Saul. Today, I want us to spend a few moments contemplating the response of David to this news as seen in 2 Samuel 1.

Saul had been a disaster for Israel and a deadly enemy toward David. We could easily forgive David if he had rejoiced at Saul’s death.

But instead, David honors the office of King, the anointing of the Lord and the image of God in every man. He chooses to grieve, and in his lament thinks of the best things he can recount about a man of whom a lot of negative things could legitimately have been sung.

And as for the messenger who proudly (and falsely) claimed to have killed the king, well his “reward” was swift and final.

To me, it says a lot about David’s character that at this critical moment he chose to celebrate the few positive aspects of this man. In fact, he honors the life of Saul his enemy right alongside the life of Jonathan his closest friend.

When a leader who has been bringing disrepute to the church is removed from the scene, do you rejoice or mourn? Do you jump onto the blogging bandwagon circling like vultures over the corpse of someone’s ministry? Or do you grieve over what might have been and try and find positive things to say about the one who was once chosen and anointed by God?

Despite the fact God himself has chosen to remove that cloak of blessing, we do well to pause for a moment and recognize how God did work through them, no matter how flawed they were. A ministry collapse, or worse yet a death, should not cause us to self-righteously point the finger in our imagined superiority. Rather the frailty of that person should remind us of our own frailty. And the grace of God, which can even use a donkey, should be celebrated.

Sometimes when a minister falls, those who were saved listening to their sermons are perplexed about the apparent anomaly of God using such an imperfect vessel. Others worry about the validity of their baptism if it was administered by someone who seems to have subsequently demonstrated they were a fake. But the truly humble recognize that when it comes to God choosing a human being to use, only imperfect, broken and flawed people are available.

David himself would later fail in a dramatic way. The frailty of others should remind us that it really is true that “there but for the grace of God go I!” When we read of the latest scandal, instead of rubbing our hands in glee, we should fall to our knees and implore God to keep his restraining and enabling hand of grace upon us.