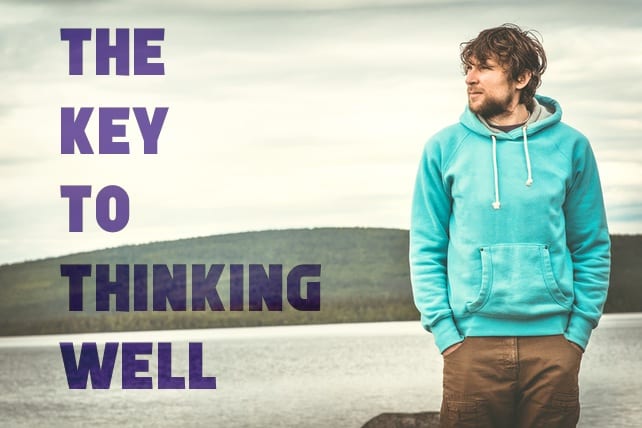 You know Einstein gave us the theory of relativity. You may not know that about the same time Einstein posited his theory, a French mathematician named Poincare did as well, yet not from the vantage point of physics, but of mathematics.

In his fascinating book Before Happiness, Harvard Professor Shawn Achor discusses the breakthrough discovered by Poincare. The Frenchman did not come to his final conclusions by obsessing over the issues. On the contrary, it was when he walked away from thinking about it that it offered him the idea he sought. He writes:

Disgusted with my failure, I went to spend a few days at the seaside, and thought of something else. One morning, walking on the bluff, the idea came to me, with just the same characteristics of brevity, suddenness and immediate certainty.*

Achor goes on to note two other occasions when Poincare solved an otherwise difficult problem by breaking away from thinking about the problem to divert his attention elsewhere.

Sometimes our best thinking comes from concentrated effort on the subject at hand. Disciplined thought matters to our intellectual and personal growth. But sometimes, and in particular when we reach an area of unresolved conflict, the best way to think about the issue is simply to stop thinking about it: Take a walk in the woods, go sit by a lake or go for a bike ride. Let your mind rest.

Think about this: Most of your “aha!” moments came when you weren’t trying to have a profound thought, right?

The very same thing happened to Einstein as well, as Achor notes:

In 1905, after a frustrating conversation with his friend Michele Besso in which he tried to reconcile all the problems he saw with Newtonian physics, he conceded defeat and gave up. While bouncing in a streetcar in Bern, Switzerland, the impoverished and defeated Einstein looked back over his shoulder and saw the Bern clock tower. He casually wondered what would happen if his streetcar suddenly zoomed away from the clock at the speed of light. Perhaps Einstein just wanted to get home faster. Maybe the great Einstein needed to go to the bathroom. But as he would put it, “A storm broke loose in my mind.” This was his unconscious brain offering his conscious brain a novel idea that would soon upend everything we thought we knew about the universe: that time was not the same everywhere in the universe. Einstein was not squiggling incomprehensible mathematical formulations on the board when he made his discovery. He was not in a physics lab. He was just on his way home.**

Two of the greatest minds in the modern era found crucial information related to incredible discoveries about reality when they were not thinking about them.

I’m learning this as well. OK, I’m not Einstein, but I love reading how he sometimes walked the wrong direction heading home, because my ADHD works like that too often. But more importantly, I’m learning that taking a day once a week to step away in order not to think about my teaching, my writing or my local church pastoral role actually helps me to think better regarding all of these. There are at least a couple of forces at work: 1) my mind needs a break, and taking a day to think about nothing more than fishing or some other trivial matter helps my mind to rest, and 2) I have some of my more original thoughts on those days.

Sabbath rest means worship. But it also means, beyond worship, no agenda. No solving world crises, developing a genius book idea or even prepping for that next talk. And by refusing to focus on such things, I in fact become a better speaker, writer and minister.