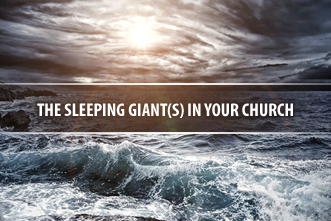 “I am fearful that all we have done is to awaken a sleeping giant and fill him with terrible resolve.”
Admiral Yamamota after the bombing of Pearl Harbor in Tora!Tora!Tora!

There is a sleeping giant in your church. Once awakened, this giant can change the equation. It can reach further and faster with the gospel than any missions team you could ever fund or any evangelistic campaign you could ever run.

Every Sunday morning, most church members walk around this slumbering colossus in the foyer of their churches, dismissing its potential. They disregard this dormant powerhouse as a pest, at worst, or irrelevant at best. But they do so to their own detriment.

Who is this sleeping giant? Or more accurately, these sleeping giants? They are teenagers! We may look over them to find other adult friends as we walk into church on Sunday morning or walk around them to shake the pastor’s hand as we are leaving, but Jesus does not ignore them. Jesus did not look over them or walk around them. Instead, he focused on them and worked through them. Most of those whom he appointed as apostles in Matthew 10 were teenagers when they began to follow Christ. And these teenagers, once fully awakened, equipped, empowered, and unleashed, turned the world upside down (see the book of Acts.)

The Apostle Paul seems to have chosen a teenager to be his right-hand man on his last and toughest missionary journeys. In Acts 16:1-5, Luke writes, “Paul came to Derbe and then to Lystra, where a disciple named Timothy lived, whose mother was Jewish and a believer but whose father was a Greek. The believers at Lystra and Iconium spoke well of him. Paul wanted to take him along on the journey, so he circumcised him because of the Jews who lived in that area, for they all knew that his father was a Greek. As they traveled from town to town, they delivered the decisions reached by the apostles and elders in Jerusalem for the people to obey. So the churches were strengthened in the faith and grew daily in numbers.”

Timothy, still identified by his mother and father and not a stand-alone man, was most likely a teenager when he began to do the dirty and dangerous apostolic work. Paul, perhaps tired of the rigmarole of traveling with “this is the way it should be” adults, decided to go with youth and idealism instead. In the words of Sean Connery in The Untouchables, when it came to finding one uncorrupted cop in their fight against Al Capone in a 1930′s Chicago, he tells Elliot Nest, “If you can’t find a good apple in the barrel, then go to the tree.” Enter Andy Garcia.

The tough cop knew that what adults often lacked the young often had. The tough apostle knew the same. Enter Timothy.

Jesus picked mostly teenagers to be his disciples, and Paul chose a teenager to be his teammate. How much more should we chose teenagers to help us lead significant ministries in our churches and drive transformational missions (a.k.a. “THE Cause”) through our churches.

I thank God for Ralph “Yankee” Arnold who put his hand on my shoulder when I was a teenager and inspired, equipped, and deployed me to try to change the world. I was young and idealistic enough to believe him. But I still believe him today, three decades later. That is why I’m leading Dare 2 Share, a ministry that mobilizes teenagers to relationally and relentlessly reach their generation for Christ.

Let’s awaken the sleeping giants in our churches and fill them with holy resolve. Then let us stand back and be in awe of what God does as a result.

What Does a Godly Relationship Look Like: 4 Insights From Jesus

Commanding Respect (Not Demanding It) as a Leader

Celebrate Recovery for Youth: How This Program Helps Students

Youth Ministry Don’ts: 18 Tips for Newbies (and Longtimers too!)

How to Spread the Gospel: 21 Ways Teens Can Evangelize

Bible Study on Crowns: Explore This Scriptural Theme With Teens