My son, Copeland, has loved his pacifier from day one. There are very few pictures we have of him without his “paci.” For a season, he had multiple pacifiers stashed in various places around our house. When he lost or left one somewhere, another would magically appear from behind a bookshelf. He’d happily pop it into his mouth. It was like watching the two-year-old toddler version of a squirrel unearthing its buried acorn.

We knew that he couldn’t have a pacifier forever. We also knew that the transition from an all-pacifier to no-pacifier life would be an emotional process. We didn’t want to traumatize our kid, either by letting him have a pacifier until he was 18, nor by simply taking his precious treasure and dump it in the trash in one swift act of cruelty. It had to be a process, a journey, a movement of maturity.
So we started making boundaries for use of the pacifier. At first, he had to leave it in the car when we went into stores. Then he had to leave it at home entirely when we left the house, setting it on the side table near our back entrance. Finally, he had to leave it in his bed, using it only for naps and bedtime. He’d initially balk, but would eventually come around. For an unknown reason, he called it his “e-teece” (spelling unknown). Maybe it was the pacifier’s name.
The fateful day came when my wife and I agreed that he needed to move past the pacifier once and for all. The e-teece had become a near-biohazard of toddler drool and required repeated washings during the day to keep it sanitary. We pondered and discussed what could be done that wouldn’t result in future years of therapy for any of us. My wife came up with the creative idea to make a big deal out of this transition, a ceremony of sorts to signify that he was becoming a “big boy.” We would turn this pacifier into a rite of passage.
Copeland loves vehicles of all kinds, including garbage trucks. He even owns a toy garbage truck that he sleeps with in bed, and loves seeing the truck come by on Wednesday mornings to pick up the trash. My wife suggested that we give the pacifier to the garbage truck as a gift. Copeland agreed that this was a good idea. It was settled. For a week, we talked every day about this important moment. “Just 3 more days, buddy! Then we’ll give the garbage truck the paci!” He would excitedly nod in agreement, perhaps not fully understanding the emotional weightiness of this decision. We made a special box in order to properly present the garbage truck with this special gift.
The day came. Copeland waited patiently for the garbage truck sitting in a special chair in the middle of our empty garage. The truck was later than usual; the anticipation was heightened. Finally, they heard the rumble of the big engine and the metallic clunking of the compacter. The truck rounded the corner and began lifting our street’s garbage bins, one by one. The pacifier, in its box, was added to our garbage. The truck came, the bin was lifted, and the pacifier was gone. It was all so fast, and Copeland was left waving to the departing truck as it carried his e-teece away.

I’d like to report that this experience led to a complete lack of tears or tantrums. I’d like to say that our creative endeavor was the miracle parenting technique that resulted in a toddler who loves to be obedient and also decided to potty train himself. But that wouldn’t be true. Come bedtime the first night, we had a very emotionally distressed toddler who missed his pacifier. For a few days, every nap and bedtime resulted in a tearful meltdown.

One day, in the midst of the tears at nap time, Copeland looked up at me and murmured, “…e-teece….”

“That’s right, we gave it as a gift to the garbage truck.”

With a tearful look of resolve in his eyes, he spoke words of incredible maturity for a two-year-old:

“I don’t need it any more…big boy now.” And he laid down.

Those weren’t words of defeat or loss. They were words of a quiet realization that he’s moved into the next season of his life, that he’s maturing, that he’s more than a baby. It’s true. He’s a big boy now. He talks and plays and laughs and runs with a bit more enthusiasm and passion now that his mouth is completely free from the constraints of a pacifier.

He’s growing up right in front of me. Maybe he’s helping me to grow up too. 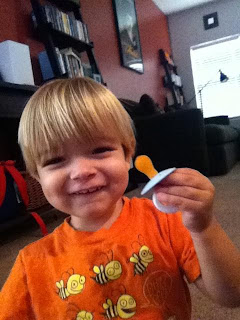 On the day we gave the pacifier to the garbage truck.

ERLC to Be Investigated After ‘public and private’ Grievances Aired

Danielle Strickland: Jesus Is the Healer of Gender Inequality in the...

Josh Gagnon: How to Make Your Church Fit Your Community

Aimee Byrd: What Does It Really Mean to Be a ‘Biblical’...