Long before he was a priest, Berezhnoy was helping out as an altar boy on Sundays at an Orthodox parish in his hometown in Eastern Ukraine. “I saw how the Russian Orthodox Church and the Russian Federation played on the religious feeling of our people in Donbas,” Berezhnoy explained, recalling pamphlets frequently being distributed to churchgoers in the early 2000s, calling on faithful to vote for Viktor Yanukovych, the pro-Russian politician who went on to become Ukraine’s president before being ousted during the 2014 Revolution of Dignity.

The creation of three distinct post-Soviet states — Ukraine, Russia and Belarus — was likened by Orthodox church leaders to an attempt to split the Holy Trinity.

“Absolutely the church was used by Russia for propaganda,” said the Rev. Cyril Hovorun, a Ukrainian priest and professor of ecclesiology, international relations and ecumenism at the Stockholm School of Theology.

In a recent interview with RNS, Hovorun noted this sort of political propaganda was not unique to Orthodox churches nearer to the Russian border, but could be found throughout the country — including at major Orthodox sacred sites, such as the Pochayiv Lavra, just a few hours’ drive from the Polish border.

“There’s always been a fusing of national and religious identity in predominantly Orthodox countries,” said Catherine Wanner, a cultural anthropologist with the Penn State School of International Affairs whose research focuses on the politics of religion in Ukraine.

But she added that Ukraine “is a really interesting example where you see a real deepening of religiosity (since the fall of the Soviet Union),” at the same time as politically there’s been “an ongoing, enduring secularization — secularism as a political principle.” 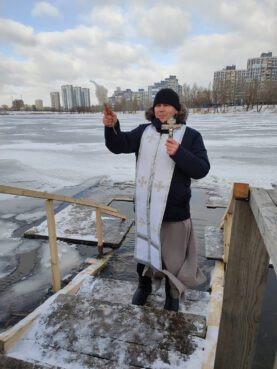 The Rev. Sergiy Berezhnoy on the shores of Lake Jordan in January 2022 on the Feast of Theophany, commemorating Christ’s baptism. Photo courtesy of Kyiv Saints Cathedral

Despite stories from the Donbas, some Orthodox faithful in the post-Soviet era did not see their Ukrainian national identity at odds with their Orthodox faith. One such person was the top Ukrainian Orthodox church leader in Kyiv, Metropolitan Volodymyr, who ordained Berezhnoy to the priesthood in 2012.

It was a very great time for the church,” said Berezhnoy. “Father (Cyril) prepared a very great project — the project of how to unite all the jurisdictions.”

But the idea of dialogue, let alone the possibility of a unified Ukrainian church with a strong national identity, was a threat to Moscow.

Hovorun’s long-planned dialogues began in summer 2009. By September of that year, Russian church leaders had removed him from his position in Ukraine and reassigned him to a church office in Russia.

“I considered it a clear movement (from Moscow) to stop the dialogue,” Hovorun said of the change.