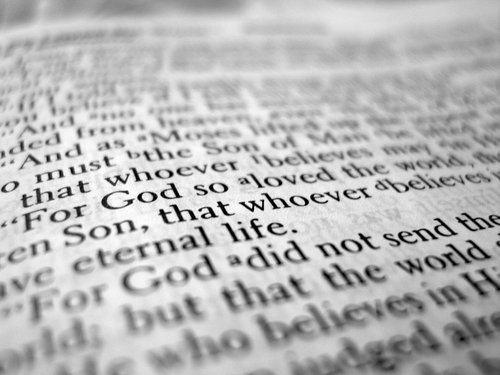 “Is the Bible the inspired Word of God or merely a number of documents man-written? If it were divinely inspired by an all-good, never-changing God, these contradictions would not be in it…[no wonder that] more than 65 million Americans…are not church members.”

This is the statement of the Society of Separationists, Inc., the group of atheists following the “revelations” of their “priestess,” Madalyn Murray O’Hair. Many agnostics and atheists today dismiss the Word of God instantly by appeal to the “innumerable contradictions” they have found in it. “How,” they ask, “can you expect us to believe in an all-powerful God who can’t keep his own revelation straight?”

These people, however, are speaking out of a deep ignorance. They simply don’t know whereof they speak. Most of the ones who cry out about the “millions of contradictions” in the Bible can’t list more than three or four at the most of which they have any personal knowledge. The old adage that “many put down the Bible before they pick it up” is sadly too true.

Aside from those who have no specific knowledge of the so-called contradictions in the Bible, what about those who actually claim to be able to produce them for our scrutiny? They must be dealt with. It is one thing to say, “No one has ever been able to produce one absolute contradiction,” and it is quite another thing to be able to back up your statement with evidence. What would the average Christian do, for example, with Dewey Beegle’s Scripture, Tradition, and Infallibility, which spends a good number of its pages on examples of what Beegle calls contradictions? It is from a desire to share the principles I have learned for resolving contradictions such as this that this article was born. There are valid, reasonable, and solid explanations for these apparent contradictions with which we are faced.

Remember, the art of resolving contradictions is only a tool of evangelism. It cannot, by itself, draw someone to Jesus Christ. Only the Holy Spirit can. However, it can break down some of the prejudices one might have against the gospel. As it is said, “a man convinced against his will is of the same opinion still.”

Logically, it is expressed as “A cannot be non-A.” In order to resolve an apparent contradiction in the scriptures, we need only present one other possibility. If one says that he has never stolen anything, we only have to show that he has stolen once to prove him wrong. It doesn’t matter if he has stolen once, ten times, or thousands of times. It’s still more than never. In the same way, one who says the Bible is contradictory is saying that no one can ever find any possible solution. As soon as we can bring up even one possibility, we have refuted his contradiction. Other possible resolutions only serve to increase the ridiculousness of his position. Sometimes, there are five or more resolutions to one alleged discrepancy, and the believer is at liberty to choose the one he thinks is the best.

Another consideration to keep in mind as we study supposed discrepancies is often referred to as “Aristotle’s Dictum.” John Warwick Montgomery in History and Christianity (p. 29) summarizes his dictum as “the benefit of the doubt is to be given to the document itself, not arrogated by the critic to himself.” In other words, the author probably knows more about the event than the critic does, and so we should allow him the benefit of the doubt unless we have clear evidence to the contrary.

Some of these “contradictions” can actually be viewed as God’s way of allowing the Bible to triumph in an almost impossible situation. If the gospels, for example, were exactly the same, the critics would immediately cry, “Scheme! Collusion!” And yet, if the gospels did contradict each other, the critics would cry even louder, “Fraud! How can a true God lie?” God has chosen the perfect road between these two positions. He has directed the minds and hearts of the scripture writers to write exactly what he wanted but in their own styles. This allows for differences without contradictions.

That is one possible explanation for the variety of written testimony in the Bible. Another explanation was ably put by Bishop Richard Whately (On Difficulties in the Writings of St. Paul):

The seeming contradictions in scripture are too numerous not to be the result of design; and doubtless were designed, not as mere difficulties to try our faith and patience, but as furnishing the most suitable mode of instruction that could have been devised, by mutually explaining and modifying or limiting or extending one another’s meaning….Instructions thus conveyed are evidently more striking and more likely to arouse the attention; and also, from the very circumstance that they call for careful reflection, more likely to make a lasting impression.

We should never forget that just because we do not have a particular answer is no reason to admit defeat and say there is no answer. Many young Christians have started to read the Bible only to put it down in frustration with their faith damaged because they were unable to answer their own questions about Bible passages that apparently had problems. None of us knows all of the answers. I have not read everything written on alleged discrepancies or their resolutions, and yet I can confidently say that since I began my study, I have never found a “contradiction” that I have not been able to either answer myself or find an answer for. If I were unable to find an answer, the testimony of my previous experience would lead me to doubt my own study, not to doubt the Bible (“In the multitude of counsel there is wisdom–” Proverbs 11:14; 15:22; 24:6)

Finally, there is a much more direct way to answer the common objections to the inerrancy of the Bible. Christianity is unique among all of the religions of the world. All religions make sweeping claims about truth and reality, and yet none except Christianity can point to historical evidence to verify those assertions. Christianity claims that God has revealed himself to us through his written Word and in the person of Jesus Christ (Hebrews 1:1). Christianity has proved this claim in the historically verifiable event of the bodily resurrection of Jesus Christ.

Although it is not my purpose in this article to explore this area of defending the Christian faith, this has been done capably in several books that are readily available to Christians. Once we have proved that Jesus is God the Son by his historical bodily resurrection (Romans 1:3-4), then we need only verify that he supports the verbal plenary inspiration of the scriptures. If he said that the Bible is without error, then there cannot be any genuine contradictions in it. Jesus did declare that the Bible was God’s infallible Word. He endorsed the Old Testament in Luke 24:25-27, 44, and the New Testament prophetically in John 14:26. Surely, the Word of the God of all creation is more trustworthy than the word of a sinful human critic two thousand years after the events!

My approach to this study is perhaps unique. Rather than a hit-or-miss approach that deals with specific problems, my approach deals with principles. The advantage of this method is that when one is prepared with the proper principles, he can answer supposed contradictions he has never even encountered before. Remember, God commands us to not only preach the gospel but also “to contend for the faith” (Jude 3), and part of our defense must be to answer those who claim that the Bible contains contradictions.